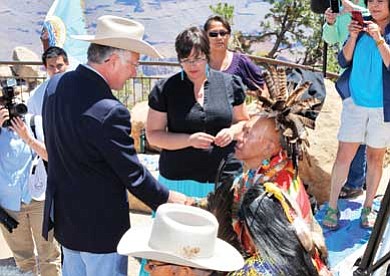 Ryan Williams/NHO<br> Secretary of the Interior Ken Salazar shakes hands with a member of the Uqualla family during a visit to Grand Canyon’s South Rim last month.

Grand Canyon Ariz. - A ban on new uranium mining claims on close to one million acres of land around the Grand Canyon recently extended by the Department of the Interior may not last after a House subcommittee voted to add language to an Interior Appropriations bill specifically canceling the moratorium.

Rep. Jeff Flake, R-Ariz., who represents Arizona's Sixth District, added the rider to the 2012 Interior and Environment Appropriation bill. Along with nullifying the six-month extension to a Department of Interior two-year moratorium on new mining, the bill, if eventually passed by a full vote on the floor of the House, would block Secretary of the Interior Ken Salazar's suggested additional 20-year mining moratorium.

Regarding the 20-year withdrawal, Flake said in a statement issued following the 23-26 committee vote that uranium mining will provide economic stimulus in Arizona.

"Uranium mining outside of Grand Canyon National Park can create jobs and stimulate the economy in northern Arizona without jeopardizing the splendor and natural beauty within the park," Flake said. "The Obama administration is stepping on Arizona's economy and overstepping in terms of government regulations by banning new uranium mining claims in northern Arizona."

Roger Clark, energy program director with the Grand Canyon Trust said the Draft environmental Statement asserts there would be little direct benefit to northern Arizona if mining were allowed to resume.

"Flake has his facts wrong," he said. "In terms of return to the state, there are no royalties, there is minimal taxes on the equipment and that's why the community of Tusayan ultimately passed a resolution

saying this is not in our best interest. That is why the Arizona Tourism Association and all these other people have said the same. It's industrializing the perimeter of the Canyon."

Following Salazar's comments at the Grand Canyon, Abbey said without additional science and analysis, the BLM, USGS, NPS and NFS are unable to assess possible risks to ground water relied upon downstream by users of major populated areas in the western United States. He added while mining is an important part of the United States energy strategy, every acre managed by the BLM is not appropriate for every use, mining included.

USGS Director McNutt added since the early 1950's, uranium mining has extracted a total of about a half-year's worth of uranium consumption given the current rate at which the U.S. consumes this resource.

"The rider was slapped onto the Interior funding bill directly in response to an announcement by Interior Secretary Ken Salazar, after an exhaustive and thorough environmental review process, who said he intends to protect one million acres of federal lands around the Grand Canyon from uranium mining," Obey said. "The committee's action invalidates a careful process that included public review and comment by some 300,000 Americans. Salazar's action would protect the Grand Canyon for future generations and help guarantee the quality of Colorado River water for downstream uses. By refusing to remove this rider, the Appropriations Committee has put all of that at risk."

Uranium mining advocates say renewed mining around the Grand Canyon would be a boon to the United States' energy reserves.

Pamela Hill, American Clean Energy Resources Trust executive director, said it is time to come to some resolution on whether mining will or will not move forward in the region.

"Of course, ACERT believes that uranium mining has been and can be done environmentally safely and with great benefit to the local communities, to the states and to the country as far as energy independence is concerned," Hill said.

The bill will likely go to the House floor sometime this week for a full vote.