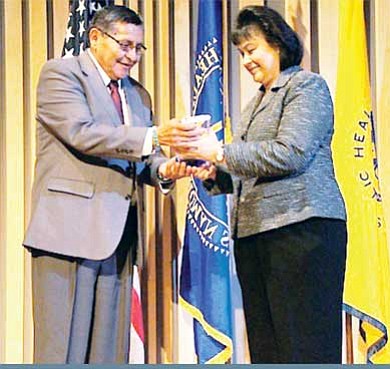 WASHINGTON, D.C. - Navajo Nation President Ben Shelly accepted the Indian Health Service (IHS) Director's Special Recognition Award from IHS Director Dr. Yvette Roubideaux on June 29, at their annual awards ceremony held at the Smithsonian's National Museum of the American Indian. He was selected for 'outstanding public health leadership' for his tremendous efforts to ban the use of commercial tobacco products in public places on the Navajo Nation.

As the first-ever tribal leader selected to receive the award, President Shelly appreciated being recognized for his work.

"The Shelly-Jim Administration is currently working on legislation to protect the health of our children, families, workers and citizens against secondhand smoke, lung cancer, and other respiratory diseases caused by using commercial tobacco products," President Shelly said after the ceremony. "We appreciate IHS's recognition and support."

The Administration is working with the public, health advocates and organizations to pass tobacco-free legislation, taking commercial tobacco out of workplaces and indoor public places on the Navajo Nation. The proposed ban would not affect the use of tobacco in traditional ceremonies.

According to IHS, the director recognizes individuals or groups of employees whose special efforts and contributions, beyond regular duty requirements, have resulted in significant benefits to the programs or customers of IHS and fulfillment of its mission.