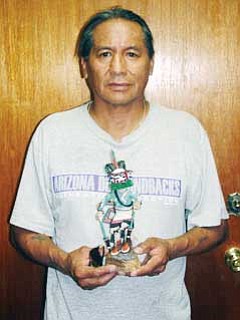 He is the son of the late Joseph and Vera (Sequi) Dallas. His early childhood years were spent in Jeddito Valley, later made his home in Moenkopi. Reggie was self-employed, carving kachina dolls. He has been featured in magazines with other known carvers

The family would like to thank all family members, members of the community, Governor's Office, Tuba City Health Care Center, Flagstaff Medical and Richard Lozano of Flagstaff Mortuary for the assistance and support in the peaceful journey of our beloved father, grandpa, brother and uncle.