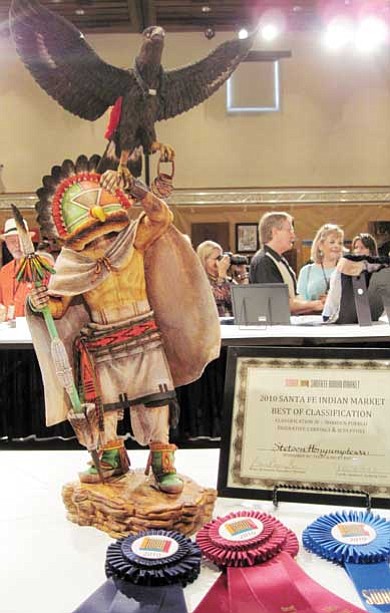 SANTA FE, N.M. - Stetson Honyumptewa, a member of the Hopi Tribe from Lower Moencopi and a major art show winner in the area of Hopi traditional carving, has chosen to honor Southwest Association on Indian Art's (SWAIA) Indian Market with a newly created piece to be raffled during this year's August celebration. Honyumptewa took one of the highest art honors that can be bestowed upon a Native artist last year at renowned Santa Fe's Indian Market. The market supports native art programs that help newer artists make their way to more advanced art development and individual studio improvements.

Santa Fe's Indian Market has the reputation of being the "world's largest and most competitive Indian art show." The market has been in existence since 1922, making this year the 89th year of artistic operation.

Honyumptewa took the Best of Show honor last year for his submission titled, "Messenger of Rain" along with Blackhorse Lowe, from the Navajo Nation. Lowe won for his film, "Shima'sani," which was a newly created category of art entries for year 2010.

Last year was the first time in SWAIA history that two artists shared the Best of Show spotlight. It took over 60 art judges more than two hours debating on 11 separate show category entries - over 4,000 entries - to settle on the final art submittals that took the final top honor.

For Honyumptewa to "give back" and honor his win last year to SWAIA is a truly humbling act. Honyumptewa was even more surprised by his win last year, since it was only his fourth time at Indian Market. When he was called on the phone to be present at the winner's media reception the evening after the judging, he still didn't know he had won the top honor. SWAIA staff are not allowed to tell the artist what they have won, only to be present at the reception.

Honyumptewa began working on the donated piece at the SWAIA Winter Indian Market, which is held three months after each summer Indian Market. The winter market is held indoors at the Convention Center in Santa Fe.

To buy tickets for the special raffle at $10 apiece that will help support future Native artists, contact SWAIA offices in Santa Fe, NM, at (505) 983-5220. The drawing will be held on Aug. 21 at noon, on the Plaza. The winner does not need to be present to win.