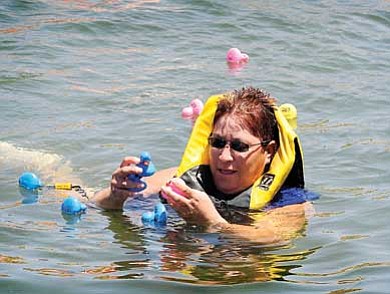 WINSLOW, Ariz. - On June 25, a nerve-racking race took place on Clear Creek south of Winslow. It was the race of small plastic ducks along 30 yards of water, vying for the first three place prizes. Each duck was numbered and cost $5 to enter in the race. All proceeds from the race go to support the Winslow Fourth of July Fireworks display.

About 450 ducks competed, so it was a congested field with most ducks unable to break from the pack. Eventually the racers spread out and the first three across the finish "string" brought modest riches for their owner/trainers.