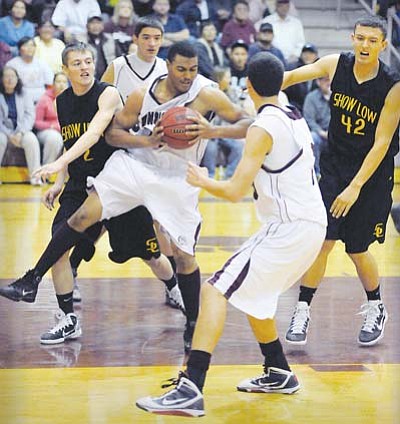 WINSLOW, Ariz. - The Show Low Cougars defeated the Winslow Bulldogs 56-47 in a non-regional basketball game played on Friday. The win improved Show Low's record to 7-13. Winslow fell to 20-5 for the season but still leads the 3A North Region with a perfect 4-0 record.

There was no girls' game and the Show Low junior varsity won an exciting but low scoring 29-27 contest.

The Cougars looked much better than their record would indicate and the two teams appeared to be evenly matched. Winslow's earlier overtime 64-59 win over the Cougars at Show Low coupled with this game show how evenly matched the teams are.

The Bulldogs led by two points at both the first quarter (12-10) and the intermission (23-21) but the Cougars rallied to tie the game 35-35 after three quarters and pulled away with a productive final period.

Tyler Williams led all scorers with 23 points for the Bulldogs but Jevon Estelle was the only other Bulldog in double figures with 11 points and only three more players scored.

Rathen Ricedorff paced the Cougars with 21 points. Josh Weeks was also in double figures for Show Low with 15 points. Ian Zimmerman played an impressive game and scored nine for the Cougars.

It seemed ironic to some sports fans that when football teams from these two schools met in the state playoffs both scored more points than their basketball teams did. Show Low won that game 68-48 and went on to win a state championship.

Winslow was to be at Holbrook on Tuesday, Jan. 25, host Monument Valley on Friday and play at Window Rock on Saturday in important 3A North Region games.