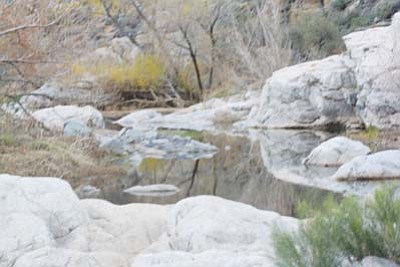 <i>Stan Bindell/NHO</i><br> The Agua Fria River cascades through the monument it was named after.

AGUA FRIA NATIONAL MONUMENT, Ariz. - Badger Springs Trail might be the most accessible way to get into Agua Fria National Monument. It is a short hike just off of Interstate 17.

The hike is about two miles long through sandy washes. The elevation change is less than 100 feet and it begins at 3,100 feet. The nearest city is Bumble Bee.

There is a lot of history and significance to this monument with more than 400 archeological sites and 2,000 years of history. Monument literature estimates the Hohokam farmers lived here about 700 A.D.

Petroglyphs of humans, deer and bighorn sheep are found in the monument. Early Spanish explorers came upon Yavapai Indians living in the area. In the 1870s, the Yavapai were forced by the U.S. Army to the San Carlos Reservation. From there, they eventually returned to their homeland with Yavapai communities today found near Camp Verde and Prescott.

In the late 1800s, miners, ranchers and homesteaders came to the Agua Fria River. Goats, cattle and sheep were raised by ranchers. Portions of ten ranches are within the monument's boundaries.

Archeological sites are in remote areas, yet many of them have suffered from vandalism.

Parts of the river run throughout the year. The riverbed is scenic, but can be challenging to cross or pass due to boulders and pools. Because of the many types of birds, the Audubon Society has declared the monument an Important Birding Area. Fish are found in the river and its tributary creeks. Gila chub and longfin dace are among the most prominent fish found here.

Cottonwood, ash, sycamore and willow trees are found throughout the monument. Grapevines grow in the moist canyons.

There are no developed facilities, but camping is permitted for up to 14 days. The roads are primitive and tough. Travel is permitted only on designated roads. Extreme heat becomes an issue in the summer.

Theft of the artifacts or damage to archeological sites are federal offenses.

Target shooting is not allowed, but hunting is permitted for those who purchase licenses or permits from Arizona Game and Fish.

The Badger Springs sign is posted on Interstate 17 and motorists can get off at Exit 256. It is located about 60 miles north of Phoenix. One writer said it's 63 miles from the I-10 stack in Phoenix.