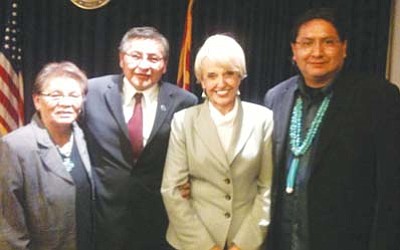 The state budget deficit currently sits at approximately $800 million, with limited areas of the state budget to cut in order to balance the deficit, and currently there are no readily available options to generate new revenue. At the meetings, President Shelly and Nez shared the nation's grave concerns, including impending cuts to public education and the Arizona Health Care Cost Containments Systems. The AHCCCS serves as Arizona's Medicaid agency in delivering healthcare options to tens of thousands of Navajos throughout the state of Arizona.

Nez and Shelly both made it clear the Navajo Nation is moving forward as a cohesive, concerted nation for the betterment of the Navajo people.

"Going forward, the Navajo Nation must speak together to best communicate our concerns to other sovereign states, so work can get done for the health and welfare of our people," Nez said. "When our intergovernmental discussions are inconsistent or down right contradictory to one another, the people suffer even more. It is imperative our Navajo government work together to achieve results for our Navajo communities and that is precisely what we are doing."

"The 2011 Arizona State Legislative session just got underway and it is time to deliver upon our initiative to preserve resources that our people depend on and to dig up opportunity that currently lies just below the surface," Nez added.