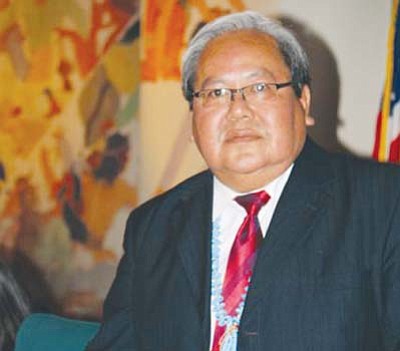 <i>Photo by Laphillda Tso</i><br> Johnny Naize (Many Farms, Tachee/Blue Gap, Nazlini, Tselani/Cottonwood and Low Mountain Chapters) will serve the next two years as Speaker of the 22nd Navajo Nation Council.

WINDOW ROCK, Ariz. - On Monday, the 22nd Navajo Nation Council convened for the first time as a 24-member body for the 2011 Winter Session. Delegate Johnny Naize (Many Farms, Tachee/Blue Gap, Nazlini, Tselani/Cottonwood and Low Mountain Chapters) was chosen as the Speaker of the 22nd Navajo Nation Council for the next two years. He won the speakership on a majority vote of 15-9.

The session began with the sponsorship of Legislation No. 0773-11 by Delegate Joshua Lavar Butler (Tonanees Dizi Chapter), which the Council approved on a vote of 21-2. Butler's legislation changed the current speaker selection process to a nomination procedure, and was strengthened with several amendments. The newly adopted process allows for the nominations of the speaker to occur on the Council floor, and also allows for a transparent process for the election of the speaker.

"The old process only benefits a couple of people. This new process resembles how our war chiefs used to nominate a speaker," Butler said. "We are incorporating traditional concepts and the Navajo people want progressive movement forward. Let's make this process our new process."

After the first round of votes, Naize and Bates advanced to a runoff election, and were given a maximum of five minutes to reiterate their platform. Following Naize's win, Judge T.J. Holgate swore in Naize as the new speaker.

"I would like to thank [Lorenzo] Bates for his leadership. He is a very intelligent, articulate person. I will always rely on his expertise," said Speaker Naize, whose platform includes rehabilitating the Former Bennett Freeze Area. "And to the 24, I thank you. We will work together the next two years. I will rely heavily on the staff to help achieve our goals and objectives during my speakership."

Afterwards, President Ben Shelly gave his 2011 State of the Nation address. He highlighted several areas of focus, including revamping the Signature Authorization Sheet (SAS) executive review process, creating an executive energy committee, building a network of technology on the Navajo Nation and working in unity with the 22nd Navajo Nation Council and Navajo Judicial Branch for the benefit of the Navajo people.

President Shelly also acknowledged the 22nd Navajo Nation Council for their restructuring efforts this past week in preparation for the winter session. "It is promising and very encouraging to me to hope for a new foundation of cooperation within our government," he said.

Several delegates thanked President Shelly for his report, and also shared the vision they have from their respective areas they represent, as well as expressing the need to work with the president.

The Council recessed at 7:30 p.m. and will continue its business with the proposed adoption of Council floor rules and additional legislation.