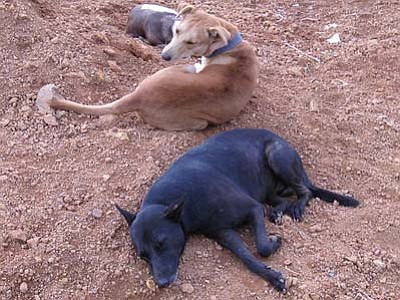 Stray dogs are a common problem across the Hopi Reservation.

HOPI RESERVATION, Ariz. - A dog that had been severely injured suffered needlessly for three days while the Hopi Tribal Rangers Office and Hotevilla Village Administration officials haggled over who had responsibility to "put the dog down."

A truck had hit the dog in question on Jan. 16. The dog then dragged its back hind legs around for two days in the winter cold before a Hotevilla village member took pity on it Jan. 19 and shot it so it wouldn't suffer from its crushed hind back legs and hips, which left a trail of blood as the dog dragged itself around the village.

Two calls were made to the Hopi Tribal Rangers office on Jan. 17-18. The person was told to call village administration because the Hopi Rangers did not handle these type of issues and that the village community service administrator (CSA) should be informed, since there is no Hopi tribal small animal ordinance in place.

A call was then placed to the Hotevilla Village administration, who then deferred the call back to the Hopi Tribal Rangers.

After a bit of discussion, Hotevilla CSA Robert Sumatskuku was contacted. He stated that he would check into the situation.

Several hours later, two village workers showed up at the resident's house and said, "We can't do anything. What if someone says something about how we shot this dog and then everyone will say something about it? We can see its hurt, but it's not our responsibility. We don't want to get involved. You should call the Hopi Rangers."

As a result, the dog suffered another afternoon until a Hotevilla resident, who does not work for the Hotevilla village or the Hopi Tribal Rangers, borrowed a rifle from another Hotevilla resident and mercifully put the dog out of its misery.

Since the Hopi Tribe was established under its current constitution in 1946, Hopis have been able to own household dogs and cats. The dogs sometimes work as sheep herders and protectors of Hopi homes and cats are used as deterrents for mice that come from the fields to raid the Hopi corn storage bins.

Despite this, there has never been a small animal ordinance for Hopi.

Animals that live around Hopi homes provide companionship, comfort and protection but the Hopi Tribe has never drafted or endorsed an ordinance to protect these same creatures that help serve Hopi residents by herding sheep, providing companionship or protecting the home.

The Hopi Vet's Office and Clinic located at Keams Canyon does offer a low cost spay and neuter clinic every year, but not many residents take advantage of this service, which means that more stray house animals that roam the Hopi Reservation are vulnerable to these kind of serious, life-threatening injuries.

Concerned citizens and animals lovers who wish to encourage the Hopi Council to introduce a resolution and action item on small animal protection, maintenance and insurance of health, and safety of dead animal removal need to work through their individual village administrators and boards for sponsorship support.