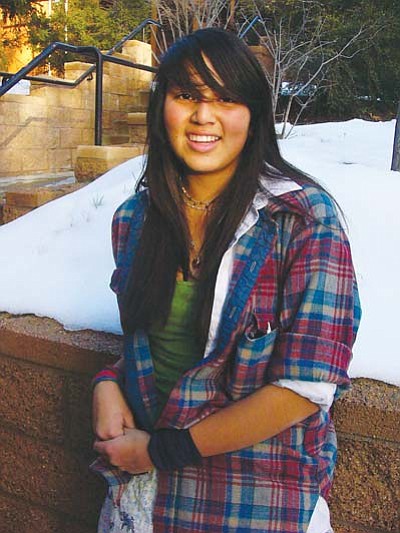 IDYLLWILD, Calif. - The Idyllwild Arts Academy is nestled into a landscape held sacred by the Cahuilla people who used the mile-high valley as a summer home-a place full of cedar and pine and majestic rocks imbued with oral histories.

"This place has a special light to it. It seems to glow," said Camille Tso, a young Navajo filmmaker who is one of six Native American students attending the prestigious arts school.

Camille began her film training under her mother, Rachel Tso, and her nephew, Klee Benally who heads "Outta Your Backpack" in Flagstaff.

Her film, "In the Footsteps of Yellow Woman," won Camille a scholarship to Idyllwild. Camille recognizes the irony that a film she made to contribute to cultural sustainability took her to a boarding school eight hours from her home.

Boarding schools have been credited with the systematic destruction of Native American language and culture.

"When I say 'boarding school' back home on the rez, people get that 'BIA' look," Camille laughed. "This is not that kind of boarding school."

"That irony is something we talked about a lot," Rachel agreed. "This boarding school is definitely different. It is the top arts academy high school in the world. Camille has come here to get the skills she needs to take back with her to work with other Native American kids. She can't get these skills back in Flagstaff - not at the high school level anyway."

Camille is learning with the top young artists in the whole world, Rachel continued.

"[Some] of her friends ... are the children of actors. The father of one of her best friends built him a sound stage behind their house to support his goal to become a filmmaker. Camille is making connections that will someday be important to her career goals. I think it's amazing that Camille is able to compete with people of this caliber," Rachel said.

The makeup of the student body was a surprise, Camille admitted. Idyllwild is truly an international school. Here, Native Americans do not make up the minority of the student population.

"In the Footsteps of Yellow Woman" has screened in 39 film festivals and won nine awards to date, and will take her to New York City's Native American Film and Video Festival at the Museum of the American Indian in April.

"I had high expectations for this school, and it has exceeded them all," Camille said. "I imagined the film department to pretty much look like the studio at Outta Your Backpack, but it is very, very different. There is even a steadycam, a camera that straps to your chest with a steady arm slider. That's a long stick with a camera on it. I am able to use a very modern way to tell old stories. It's a new way to pass on oral histories."

As she strolled around the campus, pointing out various features, Camille considered what she missed about home - besides her parents and her little sister.

"I miss the humor," Camille decided. "I miss being able to crack jokes that make sense on the rez but that nobody gets here. I told a joke about fry bread the other day and out of 30 film students only Brit and Ira got it."

Ira is Ira Abrams, one of Camille's teachers.

"Ira is a Navy veteran," Camille spouted. "This is a weird coincidence - his wife was one of the writers on 'Broken Rainbow' (a documentary about the so-called Navajo Hopi Land Dispute) and his son, Casey, is on 'American Idol.'"

When asked if attendance at Idyllwild had strengthened her dream of becoming a famous filmmaker, Camille did not hesitate in her answer.

As students arrive back to their dorms, it is Camille who comforts her mother as she prepared to return home. Later, in the little town square of Idyllwild, Rachel visited Nature's Wisdom, offering "Superior Quality Healthy Gourmet Foods, Dietary Supplements, Herbs and Gifts" to sip an "emotion potion" to ease her sadness at leaving her daughter behind.

Despite this, Rachel found comfort in the small-town atmosphere that makes Idyllwild a safe haven for the arts academy.

"I really am glad she's here," Rachel said. "It's just so hard to leave her."