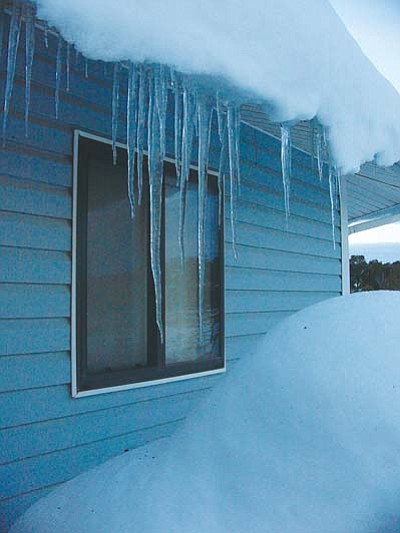 FOREST LAKE/PINON, Ariz. - The new year continues to be touched by snow, ice and very cold weather, affecting life on both the Navajo and Hopi reservations in northern Arizona. Many roads across the upper part of the state remain snow and ice packed, and on those days when the temperature allows for some melting, mud adds to the challenges of driving.

Drivers in the Pinon, Black Mesa, Hardrock and Forest Lake areas witnessed quite a few slide offs and fishtailing vehicles during the first full week of the year.

The Navajo Department of Transportation (NDOT) held a meeting at the Pinon School District offices on Jan. 7, where they were joined by representatives of several area chapters, the Bureau of Indian Affairs and others to discuss snow removal plans for the future.

Another topic was getting a maintenance yard set up to serve the district.

According to Ella M. Benally, Forest Lake Community Services Coordinator, one concern of District 4 chapters is to get gravel onto main system dirt roads.

"Because of hauling problems, no one has been able to work on this [project]," Benally said. "Forest Lake and Hard Rock are the last areas to get gravel. There are four positions open for drivers who hold CDL to drive the big 18-wheelers to deliver gravel."

Peabody Coal Company representatives have informed chapter officials that the company has extended its agreement to deliver crushed gravel for five more years, Benally continued. This gravel will be available across District 4 and Navajo County, serving chapters like Oljato, Kayenta, Dilcon and some of Apache County near Chinle.

Receiving the crushed rock is appreciated, however as Benally pointed out, the amount per chapter cannot take care of all of the roads.

"We were told that if we used the rocks at three inches, we will have enough to handle only one mile," Benally said. "So we have to be selective of where we use it, like in the clay areas.

"Since the rain and snow, cold weather has helped by freezing the roads, and we have our own grader out removing snow," Benally said. "I haven't had any complaints. People call us to remove snow to their homes but we didn't get any emergency calls. No one called in with damage to their homes or things like that."

The Forest Lake Chapter House itself, however, did experience frozen pipes that burst, requiring a clean-up and repair effort, and at the time of printing, business was back to normal.