Out & About: Peavine Trail
Peavine Trail lends appreciation for tundra swans and respect for cockleburs 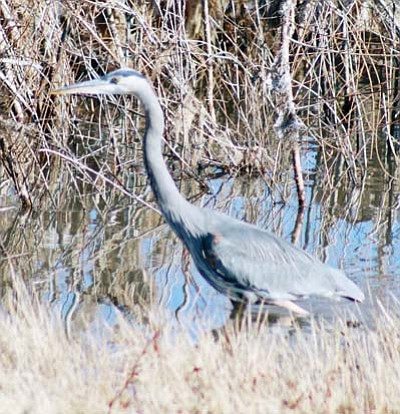 PRESCOTT, Ariz. - The Peavine Trail along Watson Lake in Prescott is family friendly with wide easy paths, but that's under normal conditions. Word was out that three migrating tundra swans were at the lake, so this hiker was photo hunting them.

The swans were near an inlet that was in the middle of the lake from the main sides. In order to get close to the swans to get the photos, this hiker had to take a side trail that was probably only a deer trail and eventually led to a cocklebur forest.

The cocklebur is a plant that has thorny sticky burs on it that hold the seeds. The pointy thorny part is annoying; the sticky part makes it sticky to anybody who grazes up against it. Hopi High computer teacher Tracy Mathis said cockleburs were the influence behind Velcro.

The trek through the cocklebur forest was well worth it because this hiker was able to get close to the swans to get some decent photos and see them in their majestic beauty.

The tundra swan has its name because it breeds on the tundra across the top of North America. It winters in large flocks along both American coasts, but can be seen in many places throughout the lower 48 states during its migration period. The swans eat a variety of aquatic plants, seeds, grains, mollusks and arthropods.

During the breeding season, the tundra swans sleep almost entirely on land. During the winter season, it sleeps more often on the water. The tundra swan is four to five feet in length and has a wing span of six and a half feet.

The swans usually stay in flocks except when in a breeding territory. The swans nest in large open bowls made of grass, sedges, lichens and moss. Swan nests on the tundra make it vulnerable to foxes, weasels and gulls. If the parents are present, they can usually ward off these predators. Wolves and bears are too big for the parents to fight off.

They usually have three to five eggs at one time. The eggs are creamy white. At hatching, the chicks are covered with down and their eyes open. They leave the nest within 24 hours ready to swim and feed.

These white swans have black feet and a beak that is mostly black with a thin salmon-pink streak running along the mouth line. Some of the subspecies have yellow in or near the beak. The iris is dark brown.

When the swans are in water with large amounts of iron, the head and neck can acquire a golden or rusty color. Immature swans, like one of the swans at Watson Lake, can have dull grey feathering.

Tundra swans have high pitched honking calls and sound similar to the black goose. They are particularly loud when in flocks foraging for food in the tundra. When migrating in flocks, the swans are usually in a "V" formation. They will migrate as far south as Mexico.

During the breeding season, tundra swans will be more aggressive. During migration periods, they are friendlier. The average life span of a tundra swan is 10 years, but the oldest recorded Tundra swan was more than 24-years-old.

Tundra swan numbers have been stable, but environmentalists have concerns about their dwindling habitat due to habitat destruction and pollution, but the primary killer of tundra swans is hunters, mostly poachers. Toxic mining waste in Silver Valley, Idaho is also responsible for the deaths of migrating tundra swans.

By the time I got to the swans, I was covered with cockleburs. This photographer should have had somebody else take a photo of me because it was hilarious being covered by these lovely ornaments. At one point after taking the photos and starting to hike out past more cockleburs, I felt something in my mustache. I thought it was some kind of bug and quickly brushed it away only to see a cocklebur go flying off.

While photo hunting for the swans, I also saw herons, red-tailed hawks, mallards and other ducks. That is why the Audubon Society has dubbed Watson Lake as an Important Birding Area.

On a nice day, this trail can be filled with people of all ages either walking or biking. Lesser traveled trails can be found off to the side, including the dotted trail that follows most of the bank by the lake although this may include some rock hopping.

Hikers can go five miles one way to Side Road for a nice 10 mile roundtrip hike. Those who want more can turn right at the 3.4 mile mark as they can pick up the Iron King Trail for another 4.5 miles to the trailhead at Glassford Hills Road in Prescott Valley.

The scenery includes the marvelous boulders nestled throughout Watson Lake that are known as Granite Dells.

The Peavine Trails offers virtually no change in altitude. The trail is covered by sycamores, willows and cottonwoods.

Boating, kayaking and canoeing are part of the recreation on the lake along with fishing. Kayak and canoe rentals are available Thursday through Sunday.