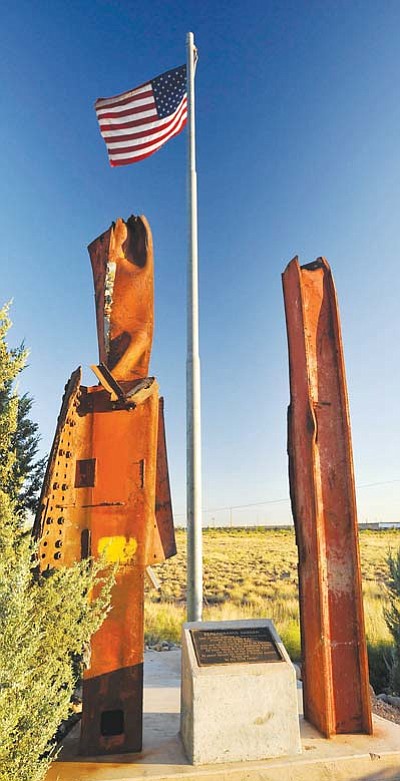 <i>Todd Roth/NHO</i><br> Two massive steel beams from the World Trade Center stand solemnly as a reminder of the tragedy that occurred on Sept. 11, 2001. The beams, which are part of a 9-11 memorial in Winslow, are scheduled to be moved to another location to allow for proposed expansion of Transcon Lane by the Arizona Department of Transportation. The new memorial is scheduled to be completed in time for the 10-year anniversary of the Sept. 11 memorial service scheduled to take place in Winslow on Sept. 11.

WINSLOW, Ariz. - On Jan. 5, Rotary International of Winslow approved the final design for moving the 9-11 Memorial World Trade Center Memorial. Winslow has two of the largest steel beams from the Twin Towers on display outside of New York City. They are located at the intersection of Transcon Lane and East Third Street.

ADOT has plans to improve Transcon Lane through the Third Street intersection, which promoted the need to move the 9-11 Memorial.

A number of site plans were developed by Paul Ferris, a Winslow city planner and architect. The proposals were reviewed by those who erected the existing monument, current Rotary Committee members and interested parties. The final design reflects reverence for all the

9-11 victims, including those who died in Pennsylvania and at the Pentagon as well as those in New York City. The new memorial will allow the community to have its 9-11 gatherings at the beams and allow for significantly more people to attend. The present location does not allow for large gatherings or parking.

The beams will be in place at the new locaton in time for the 10-year memorial service on Sept. 11, 2011. The site completion will be ongoing depending upon financial support generated for the project.