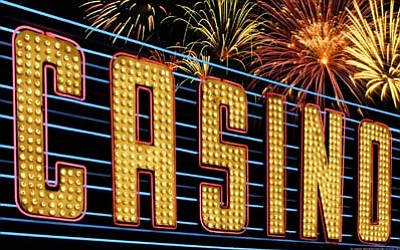 On Dec. 27, they signed documents for a $35 million loan for the Upper Fruitland casino.

"It's all for the people," Shirley said. "I cannot thank you enough on behalf of the people. Thank you for being there for us, and thank you for trusting us with your money. I would have you believe that the Navajo Nation is good for it."

Construction of the $150 million Twin Arrows project is scheduled to begin March 15 and completed on June 15, he said.

Winter said the project will reflect Navajo like no other casino.

"This will be a resort-casino that will express Navajo culture from the moment people enter the property to the moment they leave," he said. "It will be the only such casino that is structured that way in the entire state of Arizona."

He said the project was put into place quickly because of the cooperation among the Navajo executive and legislative branches, the Navajo-Hopi Land Commission, the Navajo Department of Justice, the Gaming Enterprise and the federal government.

"I can say without a doubt that this was the finest example of government working together that I've ever seen in any of the previous positions that I've had," Winter said. "We were able to accomplish something here, Mr. President, that I've never seen done anywhere else, including working for state governments and for the federal government."

The Twin Arrows project will be something that the Navajo people will be extremely proud of, he said. The project will put approximately $25 million in wages and benefits into Navajo families' pockets, he said.

He said the project was on a fast track from day one.

Shirley expressed his appreciation to all involved and emphasized that it is done on behalf of the people, and to meet the needs of the elderly, the veterans, the children, and the land.

"That's a lot of money. Certainly in due time we're going to pay that back, and then to multiply that, and somewhere down the road if we can multiply that 10 times, it's a billion dollars," he said. "That's the prayer behind it."

"I for one would like to believe we're still going to have casinos 30, 40, 50 years down the road continuing to generate revenues," he said.

"The presidency and the Nation's council, working together, have made a lot of accomplishments," Shirley said. "We've gone where no leadership has going before. Certainly here and there we had our disagreements. But then we always remembered we're also kin. Kinship is still very strong here on Navajoland. With kinship come k'e, and that's not going to go away. That's something that's forever."

He said he appreciated council delegates standing up for the people to get the people casinos. He also gave much credit to Winter and his staff, whom he said has brought the Navajo Nation a long ways.