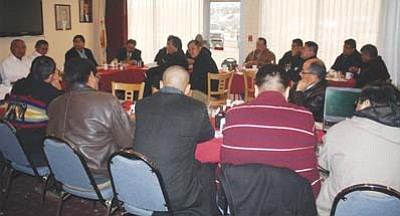 Plans for chapter issues, the budget, and establishing effective and efficient communication between the three branches were discussed by tribal leaders.

Speaker Pro-Tem Nez emphasized that the Council wants to have a direct impact on drafting its own agenda for the upcoming work sessions. This will help the Council focus on issues case by case. Some major issues that are of concern are the Navajo Nation budget is continuing resolution which needs to be approved by the 22nd Navajo Nation Council, the vacancy of the Chief Legislative Counsel position, possible staff for the 24 Council delegates, and possible amendments to Title 2 of the Navajo Nation Code.

Delegate Lorenzo Bates (T'iistoh Sikaad, Nenahnezad, Upper Fruitland, Tse'daa'kaan, Newcomb, San Juan) said, "We need to live within the means of the budget of $148 million and we would all like to see the deficit fixed."

President Shelly, Speaker Nez and Chief Justice Yazzie all deemed communication as a very important aspect to continue being effective leaders of the Navajo people and to effectively complete plans.

"A respectable communication is important because we are representatives of the Navajo Nation," Speaker Nez said. "So when we are executing political issues at the state, federal and international levels, we must show that we are united, professional and well informed. This is accomplishable with great communication."

President Shelly said, "I told them my plans as the president for the sake of unity. I asked them to restructure their organization in the area of standing committees. We are waiting for the 22nd Council to amend Title 2. I will keep abreast of the work session they will be hosting. I will be looking at the past condition of appropriation, to consolidate, and do whatever else we need to do. This is a good start and this is how it should be. We all talked and shared information out of good spirit so that we all know what we are planning for the Nation. All three branches were here and everyone put in their input. It was a friendly event."

In reference to the theme of unity, Chief Justice Yazzie emphasized that the Judicial Branch is in support of the new beginning of collaboration between the three branches.

Immediately after the meeting, the Council met to begin the list of issues that need to be addressed within the Legislative Branch.

Discussions were intellectual, detailed, complex and ranged from the ongoing issues of the Navajo Nation, to new responsibilities of the Council. The workload will be large, so how do the Council delegates accomplish their goals, and the people's expectations of them were amongst other conversations.

Delegate Johnny Naize (Many Farms, Tachee/Blue Gap, Nazlini, Tselani/Cottonwood, Low Mountain) mentioned two Chapters he is representing were having meetings, all the while the Council's meeting was in progress.

Delegate Nelson Begaye (Lukachukai, Round Rock, Tsaile,/Wheatfields, Tse Cheizhi/Rough Rock) mentioned that the people need to understand that many major issues need to be addressed and are of extreme importance for the Navajo Nation government to move forward.

Speaker Nez therefore respectfully requests that all Chapter officials and the Navajo people be patient and understand that the Council is working hard and diligently to accomplish a workable structure for the Navajo Nation government.

The Diné Policy Institute (DPI) presented three options to the Council on how to restructure the Navajo Nation government, comparing and forecasting the workload of the Council delegates, implementing Sa'ah Naghai Bik'e Hozhoon.

The results were the three following options:

• Committee of the Whole -  all delegates be involved with each standing committees.