Letter: A step in the right direction 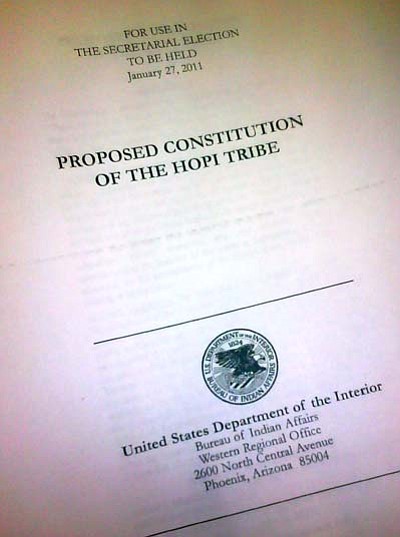 The latest proposed revisions to the Hopi Constitution is a step in the right direction. In my opinion, it will prevent some politicians who sit on the Hopi Tribal Council from using the existing Hopi Constitution for personal political gain, which has happened in the last three years of turmoil.

By setting up four independent branches of Hopi government, the Council will no longer repeat what happened when the anti-Ben Nuvamsa group managed to take our civil rights away by nullifying the 2007 Special Elections that Nuvamsa won; take over the Chairmanship; and, set up an Interim Government when Nuvamsa was forced to resign.

By doing this, the anti-Nuvamsa group prevented us from voting for a new Chairman; fired the Hopi Appellate Court judges because they ruled that the nullification of the Special Election was illegal; abused tribal funds (our money) by hiring a lawyer to defend former Vice Chairman Honyaoma; and override a decision by the Bacavi Village Board of Directors in removing its representatives, which was an autonomous village decision. Under the new revised Constitition, this will never happen again.

Among the Council Representatives who overrode the Bacavi Village decision were representatives appointed by the "traditional Kikmongwi" of First Mesa and Mishongnovi to serve on their behalf.

By allowing their representatives to override Bacavi's decision, they interfered in the internal affairs of another village. This is a violation of traditional law and a violation of the Hopi Constitution. The traditional law says a Kikmongwi cannot get involved in matters under the jurisdiction of another village. The proposed revision will prevent this from ever happening again.

The Chairman, to be called President if the revision passes, will now have specific powers such as the authority to veto a resolution. If this was in place in 2007, Resolution H-036-2007 passed by Council, invalidating the Special Elections, would not have happened.

A flyer is presently circulating, inviting the public to attend a meeting where Ben Nuvamsa, Gary LaRance, Larry Hamana, and others, will give "the facts" about the proposed revisions to the Constitution. This is fine, but "the facts" can only be done in a Hopi Court, if the revisions are challenged. Until then, "the facts" presented are only personal opinions. For example, I do not believe it is a fact that our Hopi religion will end if this revision is approved, as the Hopi Tribal Council does not control the religious practices of any village - only the independent ceremonial leaders do.

In fact, the revision also gives us, the people, the power to challenge any law through a referendum. I regret that the revision does not give people the power to recall a Chairman (President) by popular vote, but this can be added later if the people want this in place.

Gary LaRance, Ben Nuvamsa, and Larry Hamana have now filed a request in the Hopi Tribal Court to stop the BIA Secretarial Election scheduled to take place on Jan. 27. If they succeed, my right and the rights of others to participate in improving our government, will be denied us, once again.

For the reasons mentioned, I will vote "yes" in favor of the revisions. I do not want to see another "downfall" of my government, and the abuse of tribal funds. I would like the traditional office of a Kikmongwi to be preserved, respected, and honored - not abused and politicized.

I wholeheartedly believe that the revisions, though not perfect, is a step toward building a government we can all be proud of.