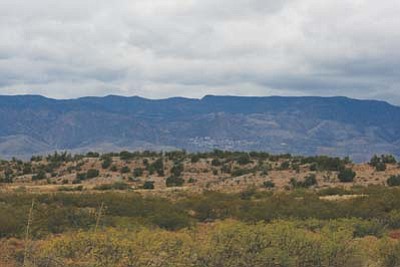 <i>Lisa Viotti/NHO</i><br> The community of Jerome can be seen in the distance along Lime Kiln Trail.

COTTONWOOD, Ariz. - The Lime Kiln trail in Cottonwood is perfect for hikers who like the red rocks of Sedona, endurance hikes and the history of the wild west.

The hike is rated as strenuous, but that's probably based on the share mileage because there isn't much of an elevation change and the path is wide and easy. Those who don't want to go the entire way can turn around either at Bill Grey Road four miles in or Highway 89A another five miles in at the nine-mile mark.

But all along the route there is the great scenery of the red sand and red rocks.

According to Dead Horse Ranch State Park literature, the Lime Kiln Trail, also called the Lime Kiln Historic Wagon Trail was built during the 1880s to burn limestone for the Willard House and Strahan House. Charles and Mack Willard built the house in Cottonwood for their widowed mother Mary.

Charles Willard is recognized as the father of Cottonwood.

Today the kiln is approximately six feet high, but at one time it stood 20 feet tall. The Lime Kiln Road was built at the same time as the kiln to bring lime from the kiln to the two house construction site.

The road later continued past the kiln to connect into Oak Creek Road and became known as the Lime Kiln cut-off. It was called the cut-off because it was a shorter route to the Upper Verde Valley for those using horse and wagon. The road was cut off before automobiles became common.

In 2000, the Lime Kiln Trail was designated as a millennium trail by the White House Millennium Council to connect the people to their land, history and culture.

In 2005 the trail was listed as a Centennial Trail in celebration of the 100th birthday of the U.S. Forest Service. The trail is also part of the Coconino National Forest System.