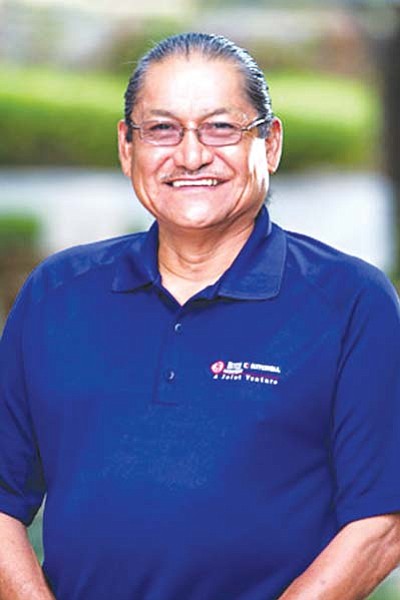 PHOENIX, Ariz. - As a 28-year old construction student at ASU in the turbulent 1970s, Jeff Begay, at the time a Vietnam veteran, never could have imagined his life path over the next 35 years would lead him to the current moment as recipient of prestigious dual honors - ASU Outstanding Alumni of the Year and Outstanding Native American ASU Alumni.

As a proud member of the Navajo Nation, Begay is a model of success throughout the profession he discovered while a student at ASU's Del E. Webb School of Construction. He graduated in 1974.

In his statement nominating Begay for the Outstanding Alumni honor, Dr. Peterson Zah, ASU's Special Advisor to the President on American Indian Affairs and Former Chairman and President of the Navajo Nation, noted Jeff's passion to build better communities. "He wants Indian Country and the construction industry to have stronger and more effective working relationships and works hard as a bridge builder between cultures and perspectives," the nomination stated.

Just a few weeks prior to his honor at the School of Construction, Begay was recognized as Outstanding Alumni by the University's Native American Alumni Association.

"Jeff plays an instrumental role in Kitchell's Native American construction division, and especially our outreach to Navajo communities," said Brad Gabel, Kitchell vice president. "He treats each project as much more than a job, but a way to engage and give back to the local community. These two honors are much deserved."

Begay recently organized a remodel and retrofit of a disabled veteran's home in the community of Rough Rock where Kitchell is working on a school project. When he heard the veteran's story of his struggles to live in his home, Begay quickly mobilized his colleagues and the community to help.

"That's just Jeff's nature," Gabel said. "His culture, his upbringing, and his life experiences have taught him the value of giving back, and that attitude is infectious."

Begay was raised in the community of Teesto. He is of the Nat'oh dine'e Tachii'nii (Tabacco) clan born for the Laguna (Corn) clan. Begay worked in the construction industry after first graduating from college and was tapped to help build Kitchell's Native American practice. Begay is currently the business development manager for BITCO-Kitchell, a joint partnership devoted to delivering quality construction to Indian Country with buildings that benefit their communities with services and/or jobs.

Since graduating, Begay has paved the way for many Native American students to attend ASU and work in the construction industry. He organizes Kitchell's very popular annual Native American Cultural Sensitivity Semiars, where invited guests from various tribal communities speak about their history, culture and community.

"It is a tremendous honor for me to receive these awards," Begay said. "I am grateful to my dedicated construction colleagues who have been instrumental in making significant changes to our industry, and to the entire Native American Division at Kitchell, which has made a profound commitment to improve the delivery of quality construction to Indian Country with integrity and most importantly respect."

Begay is actively involved in the Veteran's Warrior Society as a gourd dancer in the powwow circuit, former President of the American Indian Council of Architects and Engineers, and a founding Executive Committee member of the ASU DEWSC Construction in Indian Country organization. He is a proud father and grandfather of two daughters, two granddaughters, and five grandsons.