Navajo arts center to provide venue for all artists 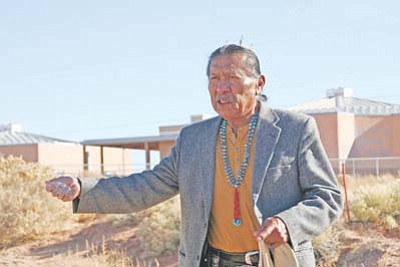 SEBA DALKAI, Ariz. - James Peshlakai and Kyril Calsoyas, both longtime educators on the Navajo Nation, have announced a collaboration that will create an open studio where artists can gather to share their talent with youth. The Navajo Institute for Cultural Arts will be part of Diné Southwest High School (DSHS) while offering expanded services to the general Navajo community.

NICA will be housed in a 6,000 square foot building at Seba Dalkai, Calsoyas said.

Calsoyas, who directs the DSHS, said that the Navajo Institute for Cultural Arts (NICA) came into existence through the efforts of a number of Navajo cultural and educational leaders.

"Diné Inc., a non-profit educational service organization, has determined that providing a center for art education on the Navajo Nation is of great importance. We envision NICA as a place where film makers, writers, theater artists, studio artists, and traditional craftspeople can work with youth to create a new generation of artists for the Navajo Nation," he stated.

Calsoyas added, "The project will focus on providing a venue where Navajo people of all ages can come and share their skills, knowledge and cultural traditions and learn new approaches to their creative art. Preservation of Navajo culture and language through integrating them into the creative arts is a focus of NICA."

"Diné Southwest High School and Diné Inc. are collaborating in the construction project which will provide facilities for media production, crafts work, studio art and theater," Calsoyas continued. "The facility will have performance and gallery areas in addition to production studios. It is expected that NICA will be forming partnerships with other institutions involved in arts, film, Indigenous culture and writing education."

Calsoyas and Peshlakai envision these partnerships allowing interns, practicing artists, film makers and others to establish long term connections with NICA by providing resources and expertise for building a Navajo cultural arts community centered on arts production, marketing, and preservation of cultural heritage.

"At this time, NICA is exploring potential relationships with creative arts institutions around the world to enable a high level of instruction, practice, and exposure through its projects," Calsoyas explained. "With time, NICA expects to establish reciprocal exchanges and educational credit arrangements with institutions interested in linking with a Navajo cultural center."

Peshlakai observed that progress is moving forward quickly, and there are deadlines to be met. One chore recently tackled was the announcement of the architect and construction company.

"The construction company selected for the new building is Kinney Construction of Flagstaff," Kalsoyas said. "The architectural firm is David Shambach, Tucson."

Peshlakai, who has served his people in many capacities including teacher, artist and recording artist, described some of his visions for NICA.

"We have met with Rex Lee Jim, vice president of the Navajo Nation," Peshlakai continued. "He is a published writer of Navajo language material and would like to see ... other Navajo writing [published.]"

Other artists who have expressed interest in the project includes Baje Whitethorne, who heads a non-profit organization to assist young Native American artists. Shalta Peshlakai is a culinary artist trained in Italy and in Native American culinary arts. Jay Begaye and his daughter Timesha are recipients of Native American Music Awards. James King is this year's Santa Fe Indian Market's Best of Show artist. Finally, Dr. Dollie Manson is a former Miss Navajo. Peshlakai hopes to see these artists and more as potential instructors.

"Right now we are seeking donations of various equipment items, such as classroom supplies, furniture and other supplies," Peshlakai continued. "I have contacted several people to help me in this search. I have also enlisted several people from off the reservation to help us find items and teachers we need to begin instruction."

Peshlakai extends an open invitation to any and all who want to be a part of NICA.

"Please, join us in our endeavors and dreams and be a part of it," Peshlakai said. "Let the Holy People bless your journeys on your road of life."