Nahsonhoya appointed to NPC governing board 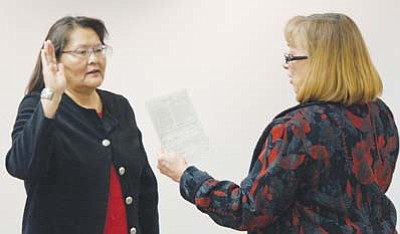 Linda Morrow (right), Navajo County School Superintendent, administered the oath of office to newly appointed Northland Pioneer College Governing Board member Louella Nahsonhoya, who will represent District 2, comprised of the Hopi communities, northern Winslow precincts and some Navajo communities. Nahsonhoya had previously worked for NPC in various capacities, including Hopi Center manager, academic advisor and Adult Basic Education site coordinator. She also worked for NAU in similar capacities. "Louella's passion, especially for students, made her an excellent candidate to fill the board position," Morrow commented. Since no candidate filed for the seat in last November's general election, Morrow is required by state statute to appoint someone to fill the vacancy until the next general election in November 2012. The term for the District 2 seat runs through December 2016.