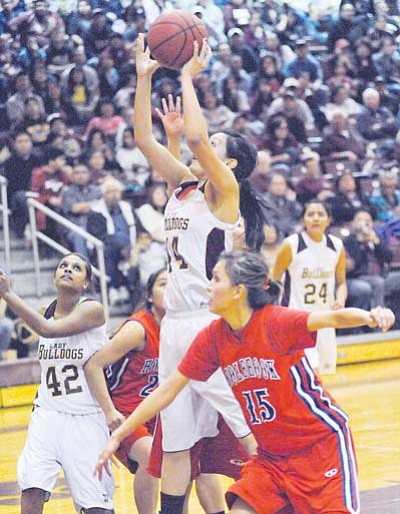 <i>Todd Roth/NHO</i><br> Lady Bulldog Robina Villanueva (44) goes up for two points against a couple of Holbrook Lady Roadrunner defenders during last Saturday’s Arizona 3A Conference State Basketball Tournament in Winslow. Despite a valiant effort, the Lady Bulldogs ended their 16-14 season with a 57-53 loss to the Lady Roadrunners.

WINSLOW, Ariz. - The Holbrook Lady Roadrunners trailed most of the game but came from behind in the final quarter to defeat the Winslow Lady Bulldogs 57-53 in an Arizona 3A Conference State Tournament game played in Winslow on Friday. The win ousted Winslow from the tournament and ended their season with a 16-14 record. Holbrook advanced to the second round on Monday in Prescott against Monument Valley, a 58-31 winner over Round Valley in Kayenta. Holbrook will take an 18-11 record into the quarter finals.

Winslow led from the first moments until nearly half of the fourth quarter was over. The Lady Roadrunners got their first lead of the game 56-43 with just 4:19 left to play. The Lady Bulldogs had led 16-11 after the first quarter and a comfortable 31-22 at the half, but Holbrook had cut the margin to two at 37-35 at the end of the third quarter. The game was tied for the first time since the opening period 43-43 with 4:40 left in the game. Holbrook's biggest lead was just four points, the final margin of victory.

At least two teams from the region will have lost at Prescott on Monday as Holbrook and Monument Valley were to play as were Tuba City and Chinle. Window Rock was to play Snowflake at Prescott on Tuesday as Snowflake defeated Coolidge 68-46 at Snowflake.

In games not involving a 3A North Region team, Safford defeated Alchesay 62-45 and was to meet Estrella Foothills on Tuesday as the Lady Wolves defeated Fountain Hills 61-46.