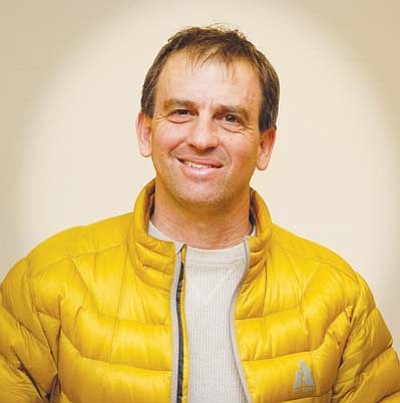 Neil Weintraub, an archaeologist with Kaibab National Forest, gave a presentation at the Hubble building in Winslow on Feb. 17. The Homolovi Archaeology Group sponsored the event. Weintraub had photos of the original excavation of the Lizard Man pueblo site from 25 years ago. The site was named Lizard Man from a large petroglyph in the form of a man-lizard in a standing position. At the time, Weintraub was a student on his first summer archaeology field trip. He attended Grinnell College in Iowa and this was his first trip to Arizona. He would later become an intern at the Museum of Northern Arizona and become a permanent resident of Flagstaff, working out of the Williams area Forest Service Offices. The Lizard Man site is located near Winona and was inhabited from 1060 to 1260 AD. It is a minor site and was excavated in order to determine if it was a satellite of a larger pueblo or if it had its own identity. It was determined to be an autonomous site and not a suburb. The site was refilled with dirt after it was documented to preserve what is left.