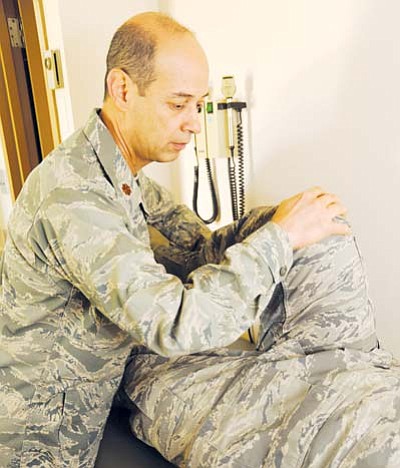 Besides his extensive civilian training, Dr. Souza or "Leno" as he is known in Tuba City, holds important military medical certifications in chemical, biological, radiological, nuclear and high-yield explosives as part of medical preparedness for homeland security and bioterrorism.

He is also certified with EMEDS-Expeditionary Medical Support System. EMEDS provides emergency-medical support to troops during wartime operations, medical relief for natural or man-made disasters and mass casualties. The system is designed to prepare military health care professionals in the field to be ready under any situation.

"I use techniques learned during these trainings everyday when I am treating patients at TCRHCC," Dr. Souza said. " I hope it never happens, but if a disaster strikes Tuba City, I will be prepared to assist our local authorities on the relief of our community.

From 2006 to 2010, after completion of the EMEDS training, Dr. Souza took on the role of establishing wound care programs at the United States Army Hospital in Fort Benning, Ga. and at the Brazilian Navy Hospital in Salvador.

"Being a citizen airman and working with highly qualified USPHS and civilian professionals at TCRHCC gives me an enormous amount of knowledge and confidence," Dr. Souza said. "I learned life and people skills, discipline, leadership, management, problem solving abilities, interaction with co-workers, supervisors, respect and appreciation for cultural diversity which we have in abundance at TCRHCC."

He was also recognized for his multicultural and multilingual excellence. In 2009, Dr. Souza was selected by the State Department as Assistant Operations Officer for the United States Embassy in Brasilia, Brazil.

Dr. Souza improved self inspection process for 33 clinic departments in the 440th Medical Squadron. These improvements benefited over 1,000 members of the 440th Air Wing USAFR. While serving as a troop commander in Scottsdale, he managed, coordinated, and provided leadership to the 16 members (nurses, physicians and technicians) who were deployed.

From 2005 until his relocation to Tuba City, Dr. Souza served as a liaison to the South Carolina Wing Civil Air Patrol-USAFR Program, leading and mentoring more than 200 members.

He has recently recognized for the outstanding service provided while serving as an inpatient physical therapist at Tuba City Regional Health Care Corporation.

The results of Dr. Souza's efforts, dedication and singularly distinctive accomplishments while serving his country and Native Americans reflect great credit upon himself, Tuba City Regional Health Care Corporation and the United States of America.