Cellular One holds celebration in Hopi 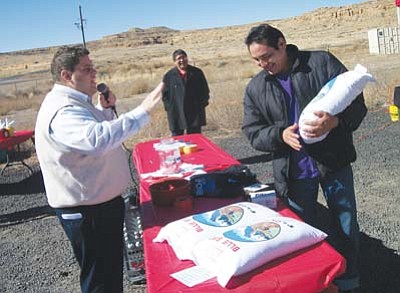 <i>Tyler Tawahongva/NHO</i><br> Cellular One District Supervisor Ethan Sewell (left) congratulates the winner of a sack of flour at a public celebration held Feb. 10 in Kykotsmovi.

KYKOTSMOVI, Ariz. - On Feb. 10 the Cellular One store in Kykotsmovi held a public celebration with hot dogs, and raffles for the attendees. The event was held to promote the Vision One program, a federally subsidized program that allows low income individuals to own a cell phone.

The event was also held to showcase new products and renew discontinued lines. Cellular One occasionally holds these public events, and at this particular event, a raffle was held and two lucky individuals won brand new phones. Some won gift cards, T-shirts and other goodies.

Lowell Cherespay has been the manager for the Hopi location for the past three years and says that business is really good. He states that he has gone from 50 applications a month to 100 a month, which shows the growth of the business in Hopi. He says that in addition to Vision One, he also has prepaid customers and a lot more people going on monthly plans.

Since many areas in northeastern Arizona are quite rural, a cell phone is often the only way to communicate. According to Tony Begay, manager of a Cellular One store in the Chinle area, there was an incident where a woman was out herding sheep and got hurt. Fortunately, she had a cell phone provided through the Vision One program to call for help.

According to Begay, many elderly people are part of the program. To get into the program, individuals fill out a form that provides information about monthly income and verifies whether they are receiving public assistance. The plan includes 40 months of service and a free phone. They pay a small fee to have the monthly service and the program is very successful. Approximately 55,000 subscribers from Page to Farmington to Gallup to Tuba City participate in the program, according to District supervisor manager Rich Jones.

One item that has been a big splash is the new Galaxy phone, one of the newest phones being offered by Cellular One. It is similar to Apple's iPhone and is capable of downloading apps and has many of the same features as the iPhone, according to District Supervisor Ethan Sewell. Jones said that it can be used as a wireless modem for a laptop if you get the data plan, which is good in remote areas such as the Hopi and Navajo reservations. He also demonstrated the many sophisticated features of this smart phone.

Begay stated there are different companies that share towers in the area and that coverage is dependent on the company and the lease agreements. It costs a lot of money to put up new cell phone towers, so much of the determination is whether there are houses in any particular area of service, according to Jones. One area that doesn't have service in areas is a stretch of Highway 264 between Hotevilla and Tuba City.

Sewell constantly travels from Page to Chinle to Hopi to Tuba City, and said, "I live in all these different places in motels." His home base is in New Mexico, but his job makes him travel throughout the Hopi and Navajo reservation. He says he really likes the people and it makes his job very enjoyable and says they are the best customers.

To learn more about the Vision One program visit your local Cellular One store.