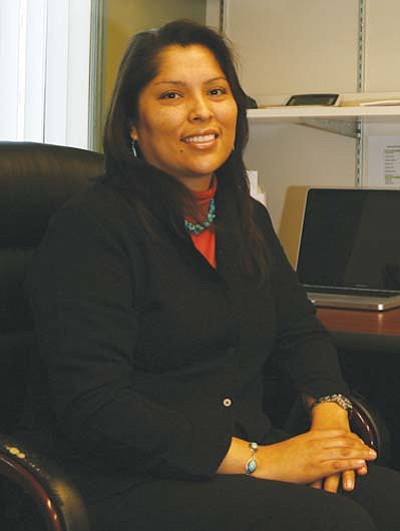 TEMPE, Ariz. - Davina Spotted Elk, Navajo, is looking for a few good teachers - teachers-to-be, to be exact - who would like to complete elementary education degrees from Arizona State University without having to leave their families and support network on the Navajo Reservation.

The Tuba City native, whose grandmothers are from Big Mountain and Monument Valley, is project director for "The Four Corners Teacher Preparation Project." The project represents a strategic partnership between ASU's Center for Indian Education and the Department of Diné Education, in cooperation with Navajo Nation schools, to address Arizona's shortage of certified Native teachers by using distance-learning technologies.

In Arizona there are more than 80,000 American Indian/Alaska Native children of school age - but only about 1,000 Native public school teachers.

In October, ASU was awarded a $1.1 million grant from the U.S. Department of Education's Office of Indian Education for the project. Now Spotted Elk is heavily into the recruiting phase, getting the word out about the degree program to Navajo Nation residents who would like to enter the teaching profession as specialists in meeting the cultural and academic needs of young American Indian students.

American Indian or Alaska Native people who have completed the equivalent of an associate's degree are eligible to apply to the program, which will accept up to 16 individuals to earn a bachelor's degree and certification in elementary education in two years.

Participants will "attend" ASU classes from Kayenta Unified School District classrooms using videoconferencing technologies. Each classroom will be able to see the other in real time. The academic programming for the grant is carried out in partnership with ASU's Mary Lou Fulton Teachers College.

"Until now, earning a teaching degree has meant, at the very least, having to leave one's family and community on the reservation for long weekends in a big city," Spotted Elk explained. "This program brings ASU right into the Navajo community."

All tuition is covered by the grant and participants are offered a monthly stipend to cover living expenses, a book allowance, use of a laptop computer and printer, and weekly individualized tutoring sessions. In addition, participants will enjoy mentoring throughout their "induction year" as new teachers. In exchange for this investment, graduates must teach for at least their first two years in schools serving large American Indian student populations.

Spotted Elk encourages potential applicants to come forward as soon as possible, to start the process of ASU admissions. Those accepted to the program will begin taking a full-time course load in the fall.

"For those who might be just a few credits shy of earning the associate's degree or meeting ASU admission requirements, there might be time for them to pick up the needed classes between now and the end of August, so I urge anyone interested to contact me," she stated.

Spotted Elk will oversee the day-to-day activities of the four-year grant project. She has worked as a researcher with the Navajo Nation and served as an academic specialist and project director on federally funded grants related to elementary, early childhood, and special education; and co-authored a research study on strong marriages among Navajo couples. Many will be familiar with her work as associate producer of the KUED-TV documentary "We Shall Remain: Navajo." She was also a production assistant for the film "The Long Walk: Tears of the Navajo."

Center for Indian Education co-directors Bryan Brayboy and Teresa McCarty serve as principal investigator and co-principal investigator for the project, respectively. Both are faculty members in the culture, society and education research cluster of the School of Social Transformation, an academic unit of ASU's College of Liberal Arts and Sciences.

The project draws on knowledge gained through the Center for Indian Education's highly successful Indigenous Teacher Preparation Program, which has prepared 10 Native teachers to date, with a 100 percent retention and graduation rate. One-third of the graduates have continued into master's programs in Indian education. Two other of the center's recently funded projects prepared 40 Native teachers for certification. These 50 educators are now making a difference in classrooms in their respective tribal communities or in schools with high American Indian enrollments.

The project's ultimate aims, Brayboy notes, are to create culturally-relevant learning environments where Native American/Alaska Native elementary students will have every opportunity to thrive and experience academic success before moving on to middle school.

"Research shows that the critical difference in student academic outcomes, particularly for linguistic and cultural minority students, is the presence of highly qualified teachers," he explains. "Further, effective Native student learning is closely associated with curricula that incorporates students' language and culture. Teachers who share the cultural and linguistic background of Navajo students in the Four Corners area offer a critical contribution to children's schooling experiences."

Spotted Elk, the mother of four children, thinks the program could appeal to others who might be drawn to education as she was - as a way to be an advocate for young Indian people.

"I was so shy when I was young," she says, recalling one missed opportunity to speak up that still brings a feeling of regret. "I was asked by a documentary filmmaker when I was 11 to talk about how relocation efforts related to the Navajo/Hopi land dispute were affecting my grandmother, Katherine Smith, and I chose not to share what I felt. I still resent that missed moment, but I turned that anger with myself into a commitment to advocacy,"

Spotted Elk concluded by saying, "Graduates of the Four Corners Teacher Preparation project will be prepared to serve as advocates in their Native communities - as teachers, role models and leaders."