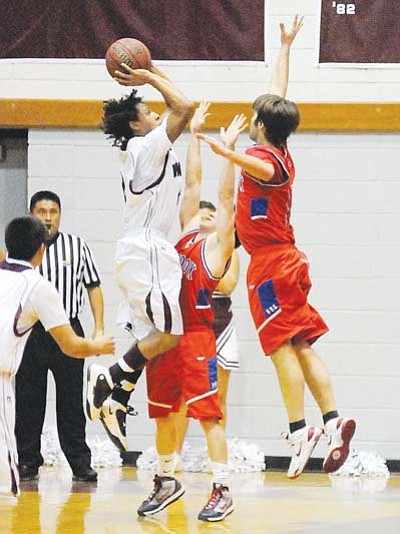 <i>Todd Roth/NHO</i><br> A Winslow Bulldog player attempts a shot while being defended by two Holbrook Roadrunners. Despite a great effort, the Bulldogs were defeated by the Roadrunners by just one point with a final score of 52-51.

WINSLOW, Ariz. - The Winslow Lady Bulldogs got revenge for an earlier loss to Holbrook but the Winslow boys saw a gallant comeback attempt fall short and lost to the Roadrunners for the second time in the season.

The Lady Bulldogs led 14-9 after the first period but had built a commanding 31-13 advantage by the intermission. The lead was a still dominant 42-18 at the end of the third quarter.

Gabby Stacey led all scorers with 14 points for Winslow. Felencia Keams was also in double figures for the Lady Bulldogs with 11 points. Aaren Billie led Holbrook with eight points. The Lady Roadrunners did not have a player in double figures.

The victory ended a seven game losing streak for Winslow. Both teams will play their next game in the 3A North Region Tournament at Chinle against an opponent to be named later.

In the boys' game the Roadrunners had the game under control for the first three periods but had to withstand a furious Winslow rush in the final period to prevail.

The Roadrunners defeated the Bulldogs

52-51 in the 3A North Region basketball game. The win improved Holbrook's record to 25-4 for the season and

The Bulldogs had trouble early with the Holbrook defense and trailed 11-7 after the first quarter and 22-15 at the half.

The third quarter was huge for the Roadrunners as they built a double digit 45-29 lead. Winslow roared back in the final period scoring as many points in that quarter as they had in the other three. The Roadrunners managed to prevail 61-58 and never trailed in the contest.

Kraig Shirley scored over half of Winslow's points and led all scorers with 30 points. Tyler Williams with 11 points and Jevon Estelle with 10, all in the second half were also in double figures for the Bulldogs. Jalen Jackson paced the Holbrook attack with 22 points Kory Koerperich was in double figures for the Roadrunners with 18 points. Rashaun Baldwin tallied nine for Holbrook.