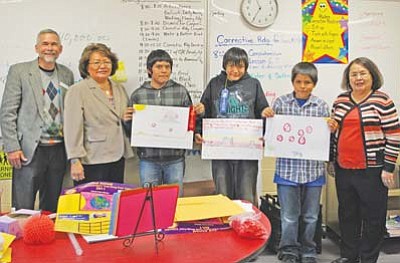 TONALEA, Ariz. - On Jan. 27, Coconino County Attorney David Rozema visited Tonalea School to present awards to three students who participated in Coconino County's Second Annual "Live Drug Free" poster contest that began in October. The contest was open to sixth grade classes across the county with over 30 classes participating and 600 entries, according to Rozema.

Rozema talked to the entire class of being drug-free and living a healthy lifestyle. The Coconino County Attorney's Office was making their third stop at Tonalea School that began with Page Middle School, Kaibeto Boarding School and continuing on recognizing winners from schools in Coconino County.

"Many things came to my mind until I found what to draw and say. After hearing Mr. Rozema talk about listening, learning and behaving in school, I felt like he was telling me when I grow up I must try to help others and help make the world a better place for the future," John said.

Agoodie said he thought of his future and his family and that it felt good to think about the things that surround you. "I was so ecstatic when David Rozema awarded me for my third place poster. I was appreciative to see their positive expression shown when they awarded me," Whiterock said.

"When my class first learned of the 'Live Drug Free' poster contest, they were delighted ... and I was excited for them. Once they became engaged in this project, a wealth of ideas was poured onto their drawing paper. They got the job done and were recognized for their work." Hemstreet said.

Tonalea School participates in Red Ribbon Week in the fall and continuously educates students and parents on healthy lifestyles by sponsoring family and literacy nights. The comedy duo James and Ernie along with Pax Harvey and James Bilagody are among the many presenters that brought awareness education classes on bullying, domestic violence and being drug and alcohol free.