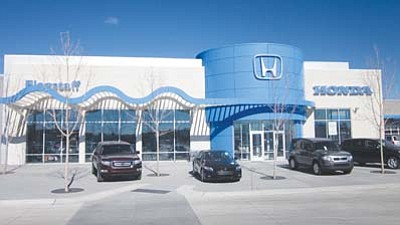 FLAGSTAFF, Ariz. - The Findlay Automotive Group has acquired Flagstaff Honda in Flagstaff. The dealership has been renamed Findlay Honda Flagstaff.

Robby Findlay, who has been a Flagstaff resident for several years, is the General Manager of the new dealership. He also oversees Findlay's Toyota and Volkswagen dealerships in Flagstaff.

"Robby has done an outstanding job for us in Flagstaff," said Tyler Corder, Findlay Automotive's chief financial officer. "The efforts of Robby and his team have allowed us to prosper in Flagstaff despite the difficult economy of the past few years. Now that the economy is improving we feel the future there is very bright. Our confidence in the Flagstaff market is what prompted us to acquire the Honda dealership," said Corder.

Findlay Honda Flagstaff is the 23rd dealership owned by the Findlay Automotive Group. The organization is headquartered in Henderson, Nev. and has dealerships in Arizona, Nevada, Utah and Idaho.