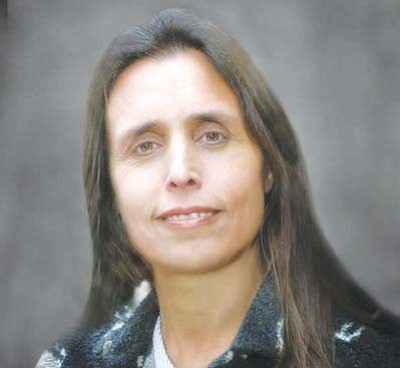 FLAGSTAFF, Ariz. - Winona LaDuke is a longtime environmental and social activist who has inspired thousands of Native Americans with her political writing and her personal, inspiring presentations. LaDuke gave such a presentation on Feb. 1 at Ardrey Auditorium at Northern Arizona University.

LaDuke, a member of the Anishinaabe Tribe, urged the crowd to an "intelligent but necessary uprising" to create a new future for Native Americans and all people concerned with the current state of the world environment. She gave examples of ways on how local people can take back the future and reclaim a new direction by growing and buying locally grown food, by generating renewable energy, restoring endangered species and stopping environmental degradation.

She also urged that tribal people and organizations endorse and create programs that enhance and encourage tribal language use and incorporate tribal history into local school curriculum, so that tribal heritage "does not get lost in the American melting pot."

LaDuke said she recognized that many current American employers prefer for their workers to be part of a bland, generic mainstream American society. She added there is very little acknowledgement of the "unresolved historic grief" - including tribal language and tribal history loss - that Native Americans have suffered.

A former school principal, LaDuke is acutely aware of mainstream school curricula that glosses over Native American contributions to economic and industrial progress. She urged that this must and can change at a local tribal level, but that a call to action must be taken on by the tribes themselves.

LaDuke also urged resistance to NAU's current research use of a telescope on Mt. Graham, known as Dzil Nchaa Si An in the Apache language. Western Apache tribes, including the White Mountain and San Carlos Apache, consider the mountain sacred. Mountain spirits, known as Gaahn, are believed to reside at mountains such as Mt. Graham, providing spiritual guidance, health, and direction in the Apache lifeway. Burial sites are also located on the mountain.

NAU President John Haegar has thus far not said anything regarding NAU's partnership use of a telescope research project currently in operation on Mt. Graham and endangering a species of about 200 red squirrels that live there.

NAU is in a partnership research venture called the Large Binocular Telescope, formerly the Columbus Telescope, which is visible from the San Carlos Apache reservation. The concern is that the project fragments the spruce fir habitat that the squirrels need to survive naturally.

Because areas had to be cleared for the telescope to be placed and protected from possible fire, nearly a third of the red squirrels' natural habitat was destroyed, endangering their ability to feed and protect itself from predators.

LaDuke concluded her presentation by encouraging the crowd to be vocal and active in their protests against injustices against tribal people and against environmentally dangerous projects such as the artificial snowmaking at the Arizona Snowbowl ski resort, saying,

"This is your chance to stop them from putting another blight on a sacred place," said LaDuke.

For more information about the Red Squirrel and efforts to save their habitat, contact Robin Silver of the Center for Biological Diversity at (602) 799-3275 or e-mail rsilver@biologicaldiversity.org.

Letter: Haeger 'obscures' Mount Graham information
Letter: NAU president responds to Mt. Graham misinformation
On the way to Leupp for a muttonsandwich...
Out and about: Mount Graham is highest peak in southern Arizona and worth a look
NACA Prayer Run more than a race<br><br>
Event Calendar