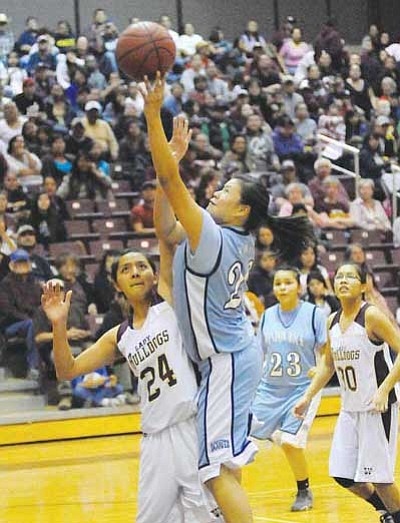 <i>Todd Roth/NHO</i><br> A Window Rock Lady Scout player shoots against a Winslow Lady Bulldog defender. The Lady Scouts beat the Lady Bulldogs with a final score of 61-51. The teams will face each other again in Window Rock on Thursday.

Window Rock had a narrow 15-12 lead after the first period of play and had increased it to 31-23 by the intermission.  The margin was 47-38 after three quarters of play.

Ashley Mitchell led all scorers with 27 points for Window Rock.  Arianne Shaka was also in double figures for the Lady Scouts with 18 points.  Felencia Keams led Winslow with 19 points and Mattea Begaii was also in double digits with 12 points.

The Lady Bulldogs were to host Tuba City on Tuesday and will journey to Window Rock on Thursday for a rematch with the Lady Scouts. They will host the Holbrook Lady Roadrunners on Friday in the final game of the regular season.

Window Rock was to host Chinle on Tuesday before entertaining Winslow again on Thursday and will end their regular season at Kayenta on Friday against the Monument Valley Lady Mustangs, a team whose only loss so far was to the Lady Scouts 50-34 at Window Rock.

In the boys' game the Bulldogs defeated the Scouts 70-50. The win improved Winslow's record to 22-6 for the season and to 6-1 in the region. Window Rock suffered only its second regional loss.

The Bulldogs got off to a very strong start and had a double digit 22-9 lead after the first quarter. The lead at the intermission was 37-23 and a still substantial 51-37 after three quarters.

Jevon Estelle and Kraig Shirley were the games high point scorers with 20 points each for Winslow. Tyler Williams was also in double figures for the Bulldogs with 16 points including four three point baskets. Jay Taliman was the only Scout in double figures with 19 points.

Winslow was to host Tuba City on Tuesday. The Bulldogs will be at Window Rock on Thursday and host Holbrook in the final game of the regular season on Friday.

The 3ANorth Region Tournament will be played at Chinle and begin on Tuesday, Feb. 8.