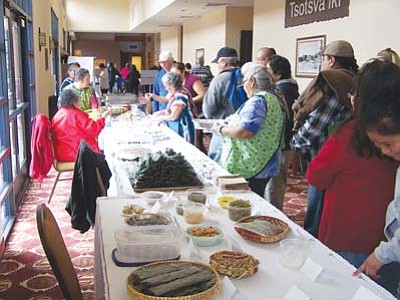 <i>Wells Mahkee Jr./NHO</i><br> Attendees of the inaugural Hopi Agricultural Expo and photo exhibit on Jan. 22 were treated to a feast of Hopi traditional foods following a buffalo dance performance outside the Moenkopi Legacy Inn and Suites.

UPPER MOENKOPI, Ariz. - The Hopi Reservation is located in one of the most arid regions of the American Southwest. Amidst these harsh conditions, however, the Hopi people thrived for centuries, cultivating the land and refining the Hopit Qatsimkiwa'at'a (Hopi way of life) long before the arrival of the first Europeans.

On Saturday, Jan. 22, the storied legacy of Hopi farming was celebrated with a photo exhibit and agricultural expo at the Moenkopi Legacy Inn and Suites. The Legacy Inn, along with the Natwani Coalition, partnered together in an effort to bring more awareness to Hopi agricultural practices that have been the foundation of Hopi culture for countless generations.

Throughout the day, visitors were able to enjoy presentations, demonstrations and dance performances, sample a variety of Hopi traditional foods and tour Hopi cornfields and gardens.

The photo exhibit, on display until Nov. 1, will be coupled with a series of workshops and tours to Hopi gardens, cornfields, and traditional meals in Hopi homes throughout the rest of the year. With this, the Natwani Coalition hopes to make Hopi and Tewa people more aware about the need to maintain a healthy diet and how preserving traditional farming practices and restoring the local food system can create and lead them down a path toward healthy living.

The results of living the Hopi way could be seen in many of the photos displayed. Most were taken during the early 1900s and featured terraced gardens planted with beans, onions, squash, and melons along with peach orchards and vast fields of corn, a Hopi staple.

The significance of corn in Hopi culture was explained by guest speaker and Hopi farmer Leonard Talaswaima of Sipaulovi, who began his presentation following brief remarks from Miss Hopi High Geraldine Numkena, James Surveyor of the Moenkopi Legacy Inn and Suites, and Leland Dennis and Samantha Honani of the Natwani Coalition.

Talaswaima explained that qaa'ö (corn) was a gift from Maasau, the Earth Guardian and comes in a variety of types and colors and represent each of the cardinal directions as well as the sky and Mother Earth. Besides being a source of food, he also explained how corn plays an important role in various ceremonies, such as baby namings, initiations and weddings.

Talaswaima also told of how the sooya (planting stick), another gift from Maasau was meant to remind people that daily labor and hard work from the use of simple technology - as opposed to tractors - will result in more benefit and a greater appreciation for your harvest in the end.

Fellow farmer and guest speaker Gilbert Naseyouma of Moenkopi added that the long tradition of farming is being threatened because the Hopi are "getting away from farming practices." He reminisced about plowing the fields with horses and the crops he would see during his youth and reiterated the need for Hopis to go back to the old ways and take care of their natural resources.

Dennis, coordinator of the Natwani Coalition had explained in a past Navajo-Hopi Observer article how when Hopi people first emerged into the Fourth World, they asked Maasau if they could live here. Maasau offered the Hopi people seeds (poshomi), a water gourd (tawia), and the sooya and explained that the Hopi way would be hard, but it would provide for a long and good life. This ethic of self-sufficiency has always been a large part of the Hopi way.

At the conclusion of the buffalo dance, visitors returned indoors and were greeted with a line of tables along the corridor wall with delicious samples of wild edible plants and traditional Hopi foods prepared by the Upper Moenkopi Elderly Center. Among the featured foods were parched corn, blue corn mush, bean and corn stew and piki, a thin wafer bread made from blue corn.

After getting their fill of Hopi delicacies, visitors made their way into the main conference room where demonstration and display booths were set up. There was plenty of information and people available to answer questions about Hopi gardening, kachina carving and edible plants as well as see demonstrations of yucca basketry and preparation of traditional Hopi farming implements made from greasewood.

The afternoon session began with a presentation by Beatrice Norton, Iva Honyestewa and Max Taylor about traditional Hopi foods and edible plants. Norton started by giving a brief history of the "Healthy Hopi Recipes" cookbook project, explaining how after the initial publication, the cookbook was revised in 2008 through a grant obtained by the Hopi Pu'tavi Project. The grant allowed for the inclusion of additional information and photos of the prepared foods.

Honeyestewa then followed up with an explanation of the survey that was conducted among single parent head of household families and their views of traditional cooking. The survey was conducted among single women ranging in age from 18-87 over a three-year period. The survey included data on resources such as financial, political, social and cultural resources and how Hopi women use these resources to set norms and articulate values to younger generations in order to carry on the cultural and spiritual importance of cooking healthy traditional meals.

Taylor concluded the presentation by giving a slide show presentation about the various edible, medicinal and utilitarian plants found on the Hopi Reservation.

Final presentations were given by Jacobo Marcus of the Hopi Permaculture Project and Anita Poleahla of Mesa Media. Marcus focused on the Kwangwa'Tsoki Orchard Restoration Project and showed slides of historic peach orchards as well as slides of current efforts by Hopi village members and schools to restore orchards in each of the Hopi villages.

He explained that fruit trees were highly prized by the Hopi due in part to their relatively low maintenance, a high survival rate and the fact that fruit trees, particularly peach trees, have long been a part of Hopi culture. Fruit trees donated by the Fruit Tree Planting Foundation are donated to the villages for this effort. For more information, visit www.ftpf.org/accomplishments.htm and scroll down to the article entitled "Hopi Village Orchards in Arizona."

Poleahla's presentation focused on the importance of Hopi language and it's utilization in the perpetuation of Hopi culture in relation to Hopi foods, agriculture and history. After a brief history of the creation of Mesa Media, she involved attendees in a Jeopardy-like Hopi language game where you were given a choice of various categories (such as Tools) and were given clues to figure out the Hopi words for points. She explained that this game was used in the Hopi schools to give students a fun way to learn and maintain the Hopi language. Mesa Media, co-founded by Poleahla and the late Ferrell Secakuku, seeks to revitalize Hopi language in order to ensure that Hopi culture persists for centuries to come by providing books, CDs and DVDs. For more information, visit www.mesamedia.org.

The day's events concluded with a final buffalo dance and event attendees were sent home with a wealth of knowledge and a much better understanding and appreciation for the efforts of the Natwani Coalition efforts to preserve Hopi traditional farming practices. For more information, call (928) 724-2390, visit www.hopifoundation.org/programs/natwani or e-mail natwani_coalition@hopifoundation.org.