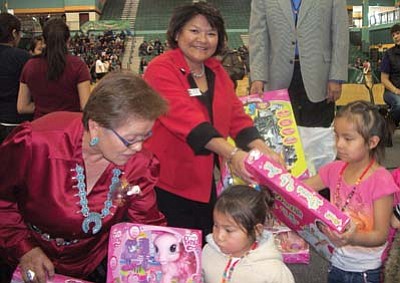 TUBA CITY, Ariz. - On Dec. 15, Tuba City received a visit from Santa Claus in the form of Toys for Tots. The U.S. Marine Corps Reserve Toys for Tots program started in 1947 when the wife of Major Bill Hendricks gave him a homemade item to give to a needy child during the holiday. Since there was no organization that existed, he decided to start his own. When he and some reservists distributed 5,000 toys to Los Angeles children, it was so successful that it was adopted by the Marine Corps. Today the Marine Corps Toys for Tots Foundation has supplemented local collections with more than 81.3 million toys valued at more than 487 million dollars, according to the www.toysfortots.org website.

On Dec. 15 the Toys for Tots program came to Tuba City along with elected officials and Navajo Nation First Lady Martha Shelly, Navajo Nation Vice President Rex Lee Jim as well as Coconino County Supervisor Lena Fowler. The three were on hand to distribute gifts to the children. Numerous schools came to receive gifts for the students including local Head Start Schools and the Tuba City Primary School, Intermediate School, Cameron and Gap schools, according to Fowler. The children were excited to get their toys and were very well behaved and patient.

"This is for the children that are not able to get gifts and will be able to enjoy something for the holidays," said Jim. Jim was busy giving toys to the waiting children standing patiently in line.

"This is for the Western Navajo Agency children and I am happy to be able to be a part of this event," said Shelly, as she gave toys away to the children.

"This event brings joy to the children by singing and giving. It shows the children the spirit of giving when some children are not able to receive anything for Christmas. This may be the only time to enjoy a gift. It is a matter of making the children and community happy by showing that Navajo Nation elected officials are present to be a part of the event," said Fowler.