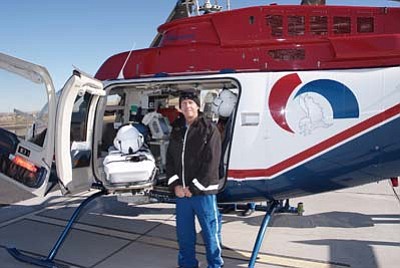 Todd Roth/NHO<br> Paramedic Eddie Rudd stands next to Angel 5. To Rudd’s right is the bed for the patient, which swings into the helicopter. Not seen are pilot Robert Shankey and nurse Dan Webber.

WINSLOW, Ariz.- The Winslow Airport had an open house on Dec. 10. Inside the lobby were many photo enlargements of notable aircraft and persons who graced the Winslow tarmac throughout the airport's history. Attendance was good, filling the airport lounge and overflowing out to the apron.

Two helicopters and two fixed wing planes were on display. The aircraft of most interest to people in northeast Arizona and the Navajo and Hopi Lands was the Guardian Air Helicopter. Those are the blue helicopters that will transport you to a major hospital for life saving care. Guardian Air is on call 24 hours a day seven days a week. They have aircraft based in Winslow, Flagstaff, Kingman, Cottonwood and Show Low. The pilot has night vision goggles to safely enable piloting in the dark. There are two more crew, a nurse and a paramedic. Then of course there is the space for a patient to lie flat and be provided with state of the art medical care during the flight.