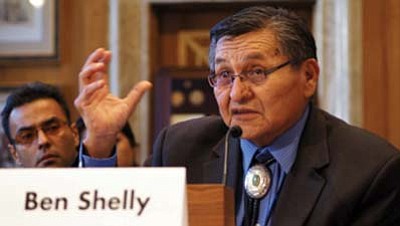 "We got a lot accomplished this week for the Navajo people. It was a successful week," President Shelly said about third annual Tribal Nations Summit hosted by the White House.

The Navajo president was in Washington for four days and met with President Barrack Obama's cabinet leaders and congressional members. Some of the major topics discussed focused on building sustainable economies and creating jobs.

The pinnacle of the week came on Friday when President Shelly and other tribal leaders spent a day at the White House Tribal Nations Conference with President Obama cabinet staffers and heard a speech from President Obama.

"I applaud President Obama and his cabinet for their work in having important discussions about critical tribal issues. I look forward to the follow up from the various agencies that will address our concerns. I have been a tribal leader for over 30 years and we shouldn't wait any longer for real changes on the Navajo Nation," said President Shelly about Obama's speech he gave Friday afternoon.

Shelly was also one of 12 tribal leaders who were chosen to participate in a special meeting Friday to have a face to face discussion with President Obama about issues important to tribal people.

President Shelly outlined major concerns to administration officials prior to the meeting addressing issues including equal treatment in tax and finance matters, protection of current funding levels, and voiced support for the administration's commitment to the Navajo Gallup Water Supply Project.

"A key component of respecting tribal sovereignty is allowing for tribes to develop and protect key natural resources," President Shelly said before the White House Conference.

"One prime example of the lack of meaningful consultation is apparent within the U.S. EPA," President Shelly added. "The Navajo Nation is faced, once again, with the EPA making decisions that will adversely affect the ability of the Navajo People to achieve a sustainable standard of living."

Shelly stated that the EPA is considering regulations that would raise operational costs and jeopardize jobs without fully engaging in a discussion on economic impacts on the Navajo Nation. Shelly urged cooperation between the EPA and the Navajo Nation that would address environmental concerns while maintaining critical jobs.

"The EPA is very quickly becoming the cause and the face of poverty in Indian country," he said.

Some of these issues were said to some officials earlier in the week.

Meetings with those officials were held separately.

Starting on Wednesday last week, as part of the Tribal Nations Leadership Council, he met with Attorney General Holder.

"We are ready to handle more jurisdiction over our land," President Shelly said.

On Thursday, President Shelly testified before the Senate Committee on Indian Affairs.

President Shelly also met with Pizarchik Thursday afternoon and was able to express his support to keep Abandoned Mine Land funding intact.

"Pizarchik took the time to let us know that OSM does not want to see the states and tribes cut out from AML funds," Shelly stated after the meeting.

During the same meeting, Shelly also laid out his concerns about the EPA to EPA Administrator Lisa Jackson.

"In this difficult economy the EPA is strangling economic development on tribal lands. Tribal sovereignty must mean that tribes with the ability to do so must be allowed to regulate and enforce environmental laws on tribal lands," President Shelly said to Jackson.

Shelly then asked, "Will the EPA commit to engaging in true tribal consultation prior to releasing regulations that will kill tribal jobs?"

Jackson didn't reply to Shelly's statement or answer his question.

Nonetheless, President Shelly was pleased with all the opportunities to present issues to key government officials.

"I'm glad that we had the time to have the Navajo Nation's issues presented to key players within the federal government," President Shelly said.