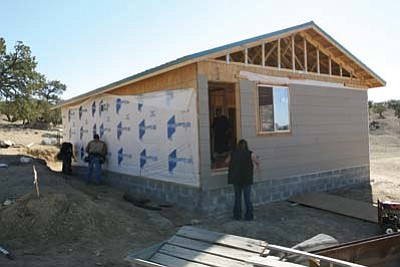 CROWNPOINT, N.M. - The Navajo Technical College (NTC) carpentry program is known for its hands-on approach to education, and so for the fourth year in a row, it will be using its educational methods to help a community member in need.

While in the past, NTC has worked on community projects for veterans in Mariano Lake and Coyote Canyon, N.M., this year NTC has taken under the responsibility of building a house extension for Becenti native, and World War II and Korean War veteran, John Devore, Sr. and his family.

"As long as somebody has the materials, we'll do it," explained Bebo, whose class only provides the labor for such requests. "Projects like these give the students an opportunity to apply the theory in the classroom through hands-on experience, while at the same time, giving them a sense of accomplishment."

Eighteen carpentry students - both in Bebo's beginning and advanced courses - and three duel credit students from Crownpoint High School are participating in the construction of the 20' x 40' extension, which will be used for bedrooms.

The class is currently at the foundation phase of the project, where they have laid footing with reinforcement and also cinder blocks. Although the project has stalled due to weather, Bebo stated that he would spend the second semester of his classes to frame the extension and put up walls with a roof.

One student who is helping with the project is Energy Systems major Collins Woody of Crownpoint, N.M. Woody registered for Bebo's carpentry class because he planned on building his own house in the Spring and thought the experience would help better prepare him.

"It's been pretty good information so far," explained Woody, who will also be earning a certificate in Electrical Trades in May. "What I learn here, I'm going to use when I build my house."

The NTC Carpentry program has gained recent notoriety after becoming nationally certified by the National Center for Construction Education and Research (NCCER). The certification allows NTC to teach NCCER curriculum, which in turn, allows students to become nationally certified. According to Bebo, the certification elevates students to first preference when entering apprenticeship programs.