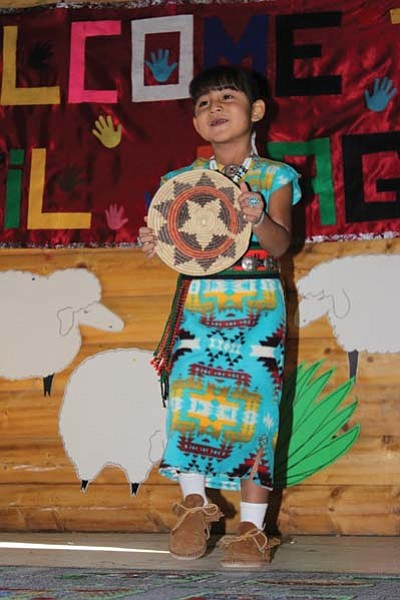 CROWNPOINT, N.M. - Over 15 children competed in the 2011-2012 Little Miss/Mr. Navajo Technical College's (NTC) Pageant, but when it was all said and done, Chamalea Caddo of Torreon, N.M. and Titus Morgan of Standing Rock, N.M. were crowned NTC royalty.

The competition took place during NTC's cultural week, and rightfully so, as each contestant displayed talents in Navajo culture and language. Children ranging from the ages of 3 to 6 competed in the pageant, showing off their skills in counting in Navajo to performing traditional dances.

Navajo Tech's newest Little Miss NTC traditionally introduced herself as part of her talent, and said the pledge of allegiance, the ABCs, and also counted to 10 in Navajo. While other contestants also performed similar talents, it was Caddo's basket dance that set her apart from the rest.

"We decided to try it at the last minute," said Caddo's mother, NTC pre-professional nursing student Charmaine Chavez of Torreon, N.M. "We only had a week to practice. We thought to just try it and she won. I'm really, really, really proud of her."

In the contest for Little Mr. NTC, brothers Titus Morgan (5 years) and Riley Morgan (3 years) placed first and second, with Titus earning the title of Little Mr. NTC. Like Caddo, Titus was a last minute addition to the pageant after his parents Timothea Tom of Standing Rock and Michael Morgan of Thoreau, N.M. noticed that there were only two boys entered in the pageant.

"We just started with Riley," stated NTC accounting student Timothea Tom. "With only two contestants, we made Titus a last minute addition. He learned everything the morning of the competition. We're really proud of him."

The Little Miss/Mr. NTC pageant is held every year by NTC Childcare Services, and according to NTC Childcare Manager, Ophelia Descheny-Burnside, every year it is getting better. This year, for instance, the NTC Childcare staff provided Navajo tea, blue bread, blue corn mush and Navajo cake to the audience.

As Little Miss/Mr. NTC, each child holds the responsibility of representing the school's childcare services at powwows, parades and any event they are asked to attend. For winning the pageant, each winner was awarded an embroidered Pendleton blanket, educational toys and hygiene products for the child and parents.