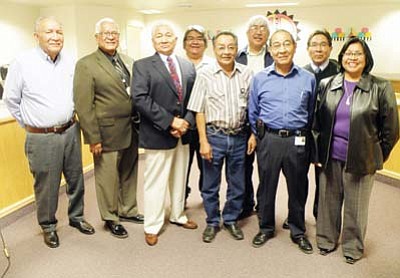 KYKOTSMOVI, Ariz. - The Hopi Tribal Council has conducted a swearing-in ceremony of six newly elected village representatives to serve on the Tribal Council.

Village leaders from Sipaulovi, Kykotsmovi, Bacavi and the Upper Village of Moencopi each presented and certified their elected village representatives. Each leader acknowledged the people in attendance and encouraged the council and reminded them of their commitment and dedication to work for the Hopi-Tewa people.

Lorena Charles, village leader from the Village of Sipaulovi, introduced and presented Cedric Kuwaninvaya, who was re-elected by village members to represent them on council for another term.

Melvin George, governor of the Village of Kykotsmovi, read into record a prepared statement, certifying Nada Talayumptewa and Danny Honanie, both of whom were re-elected by villagers, to serve another term on council as their duly elected representatives. Alfred Lomaquahu, governor of the Village of Bacavi, certified Davis Pecusa as Bacavi's duly elected representative to serve on the council.

William Charley, governor of the Upper Village of Moencopi, certified Bruce Fredericks as a newly elected representative to represent their village on the Tribal Council. Current Hopi Tribal Treasurer Robert Sumatzkuku was also elected by the villagers to represent them on council; however, his term as treasurer for the tribe does not expire until Dec. 30, 2011. Charley, therefore, recertified Everett Calnimptewa to continue his seat on Council, until Dec. 30, after which time Sumatzkuku will be sworn in as the village's representative to serve on council.

Tribal Council Secretary Martha Mase then administered the oath of office as the elected representatives took their seats on council and oaths to uphold the constitution of the Hopi Tribal government and to serve the Hopi people.