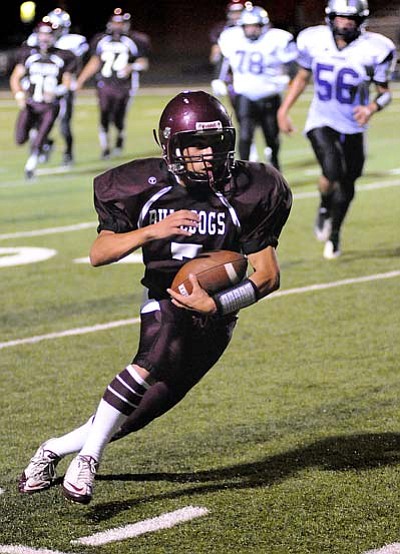 WINSLOW, Ariz. -The Winslow Bulldogs opened their 2011 season with a 34-20 win over the Sedona Red Rock Scorpions in Winslow on Friday. The game was hard fought and both teams came up with some spectacular scoring plays.

Winslow got off to a fast start as Henry Montiel ran 65 yards to score on the second play from scrimmage. The conversion by Jonathan Oso was good and the Bulldogs led 7-0 after less than a minute of play.

The Scorpions appeared to score quickly as well on an 80 yard pass play but the score was nullified due to a motion penalty. Sedona Red Rock did get on the scoreboard with just 26 second left in the first quarter on a 20 yard pass to Keenan Crans from Jack Johnson. Johnson then hit Bradley Cox for a two point conversion and an 8-7 lead to take to the second quarter.

Winslow quarterback James Martinez scored on a seven yard run with 9:30 left in the half and hit Matt Smith for a two point conversion to give the Bulldogs a 15-8 lead.

Kelly Wood scored on a one yard run with 4:43 left in the half and Oso's kick increased the lead to 22-8 at the intermission.

Scorpion quarterback Jack Johnson hit T. J. Ryan on a 55 yard trick play pass and the conversion by Johnson cut the Winslow lead to 22-15 with less than a minute gone in the second half.

The Scorpions closed the gap on a seven yard run by Bradley Cox with 4:14 left in the third quarter. The conversion pass failed and Winslow still led 22-20.

A three yard run by Kelly Wood on Winslow's last possession of the third quarter increased the lead to 28-20 as the conversion failed.

The Bulldogs got on the board again early in the fourth quarter on a six yard run by Kelly Wood. The key to that drive was Sedona Red Rock gambling on a fourth down play at their own 35 yard line. That failed gamble and Winslow's touchdown put the game practically out of reach and the final score of 34-20 on the board.

Henry Montiel did get into the Sedona Red Rock end zone on a 100 yard return of an interception in the closing seconds of the game but that play was erased by a holding penalty.

The Bulldogs will host the Holbrook Roadrunners at Emil Nasser Stadium at 7 p.m. on Friday. Holbrook opened their season against the Snowflake Lobos with the Lobos winning decisively 63-0.