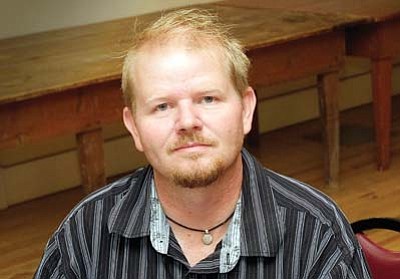 WINSLOW Ariz,-Ken Evans gave a lecture to the Homolovi Archaeology Society in Winslow on Aug. 18 about his work to identify Native Americans buried in Winslow from 1933 to 1979. Evans is the current Chairman of Winslow's Historic Preservation Commission and has taken on the job of trying to identify and document the Navajo, Hopi, Laguna, Zuni and Acoma people buried at the old Winslow Indian Sanatorium Cemetery. The Cemetery is near the current Winslow Indian Health Care Center and the Desert View City Cemetery.

On the two and one half acres containing the graves, only 30-40 markers remain. This burial ground was used from 1933 to 1977 as the final resting place for those who died at the Sanatorium (hospital) run by the BIA. There are about 417 graves at the site which is not fenced on two sides. Besides identifying the individuals buried here, Evans is working to have the cemetery fenced to protect it from further damage.

There are eight separate burial sites in Winslow but this is the only one dedicated to Native Americans.

For anyone who might have a relative buried in the old Winslow Sanatorium Cemetery and wants more information or if you have information about anyone buried there, contact Ken Evans at (928) 386-9229.