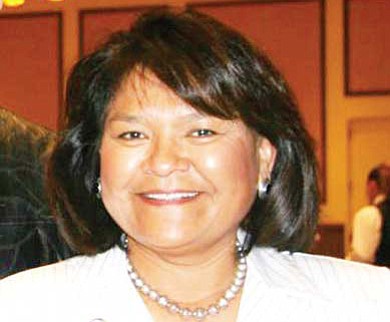 Submitted photo<br> Lena Fowler will serve as chairwoman of the Coconino County Board of Supervisors through April 16, 2012.

The District 5 supervisor began her term on Aug. 15 and became the first Navajo chair of the board in the history of the county. Supervisor Matt Ryan, District 3, was elected vice chair and will sit in for Fowler when necessary. Both were elected by their fellow supervisors at the Aug. 9 board meeting.

"Like many other Navajo officials I know, from county supervisors to Navajo Council delegates and presidents, to state senators and representatives, it is an awesome feeling to have come from herding sheep and the dirt floor of the hogan to representing the people in a position of great responsibility," Fowler said. "I will continue to do my best to be worthy of the people's trust."

On Aug. 5, Fowler was also appointed chairwoman of the National Association of Counties Intergovernmental Affairs Subcommittee on County and Tribal Government Relationships.

She and Ryan will serve their terms from Aug. 15 through April 16, 2012. Fowler is in the third year of her first four-year term as supervisor. Ryan is in the 15th year with the Board of Supervisors, having been elected to four terms.

With 18,661 square miles, Coconino County is the second largest in the country, next to San Bernardino in California, and one of the most geographically and culturally diverse. The county comprises the Grand Canyon, Glen Canyon National Recreational Area, Sunset Crater, Wupatki National Monument, Vermillion Cliffs National Monument, Lake Powell, the Colorado and Little Colorado rivers, BLM land and four national forests.

It is home to six tribes, including the Hualapai, Havasupai, Navajo, Hopi, Kaibab-Pauite, and San Juan Southern Paiute, and large ranches. The county is mostly rural with many small communities and diverse issues.

Coconino County contains one of the largest Native American populations of any county in the country. With a population of 134,421 people, each of the five supervisors represents about 26,000 people per district. The county has 13 Navajo chapters and is 27 percent Native American.

Fowler was elected to the Board of Supervisors in 2006, becoming only the second Navajo member of the board after former Supervisor Louise Yellowman.

For 10 years, Fowler was the director of the Diné College Office of Continuing Education, has served on the Navajo Nation Water Rights Commission, Coconino Plateau Water Advisory Council, Navajo Nation Motor Vehicle Authority Board, Tuba City Regional Health Care Corporation Board, Association for Indian Self-Determination in Healthcare, was co-founder and president of the Tuba City/Mungapi Family Wellness Center, Inc., and was a founding member and president of Tuba City Cultural Projects, Inc., which restored the historic 1916 Krenz-Kerley Trading Post and converted it into the Tuba City Public Library.