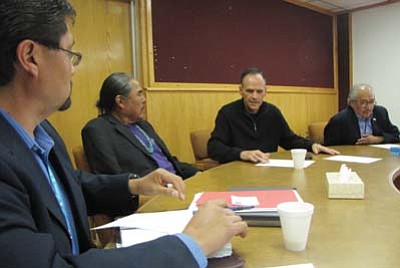 The defendants were the first to be charged with a federal hate crime under the Matthew Shepard and James Byrd Jr. Hate Crimes Prevention law.

After some defendants shift at a McDonald's restaurant, Beebe, Sanford and Hatch perpetrated against Kee a night of torture culminating in the searing of a hot wire shaped into a swastika symbol into Kee's flesh on April 29, 2010.

According to a press release issued by the U.S. Department of Justice District of New Mexico Public Affairs Officer Elizabeth Martinez, "Beebe, Hatch and Sanford were indicted by a federal grand jury in November 2010, on one count of conspiracy and one count of violating the Matthew Shepard and James Byrd, Jr. Hate Crimes Prevention Act. They were the first defendants ever to be charged under this law, which was enacted in October 2009. Beebe entered a guilty plea to one count of violating the Shepard/Byrd Act, and Sanford pled guilty to one count of conspiracy to commit a federal hate crime."

Navajo Nation Human Rights Commissioner Chairperson Duane H. Yazzie said, "Hopefully, the guilty plea of Mr. Beebe and Mr. Sanford will bring a conclusion to this very unfortunate case and will send a resounding message to perpetrators of hate crimes that they will be brought to justice."

According to the 2009 Matthew Shepard and James Byrd, Jr. Hate Crimes Prevention Act, "At the request of a State, local, or tribal law enforcement agency, the Attorney General may provide technical, forensic, prosecutorial, or any other form of assistance in the criminal investigation or prosecution of any crime that A. constitutes a crime of violence; B. constitutes a felony under the State, local, or tribal laws; and C. is motivated by prejudice based on the actual or perceived race, color, religion, national origin, gender, sexual orientation, gender identity, or disability of the victim, or is a violation of the State, local, or tribal hate crime laws."

Said Assistant Attorney General for the Civil Rights Division Thomas Perez, "The Justice Department is committed to using all the tools in our law enforcement arsenal, including the Matthew Shepard and James Byrd Jr. Hate Crimes Prevention Act, to prosecute acts of hate."

Hate crimes are also termed as a "bias of discrimination."

In a previous press release from the Navajo Nation Human Rights Commission, the Executive Director for NNHRC, Leonard Gorman, explained that the victim, Vincent Kee, is a person who immediately and unconditionally trusts people. Gorman said, "Vincent is the perfect human being who trusts other human beings."

According to Martinez's press release for the U.S. Department of Justice for the New Mexico District, "During the plea hearing, Beebe and Sanford admitted that Beebe took the victim to Beebe's apartment, which was adorned in racist paraphernalia, including a Nazi flag and a woven dream catcher with a swastika in it. After the victim had fallen asleep, the defendants began defacing the victim's body by drawing on him with blue, red, and black markers. Once the victim awoke, Beebe branded the victim, who sat with a towel in his mouth, by heating a wire hanger on a stove and burning the victim's flesh, causing a permanent deep impression of a swastika in his skin. The defendants used a cell phone to create a recording of the victim in which they coerced him to agree to the brand."

Martinez also stated in the press release, "The defendants also admitted that they defaced the victim's body with white supremacist and anti-Native American symbols, including shaving a swastika in the back of the victim's head and using marker to write the words "KKK" and "White Power" within the lines of the swastika. The defendants further mocked the victim's heritage by drawing an ejaculating penis and testicles on the victim's back, telling him that they were drawing his "native pride feathers," all the while recording their incident on a cell phone to later play."

William Hatch, 29, who is the eldest of the hate crime trio, said in the state court he drew on Kee's body, has already served time and has been released. Hatch is the first Native American to be indicted by a federal grand jury on one count of conspiracy and one count of violating the Matthew Shepard and James Byrd Jr. Hate Crimes Prevention Act.

The men on trial had ample opportunity to demonstrate clear consciousness and humanely intervene to end their tortuous night of deceit and harm.