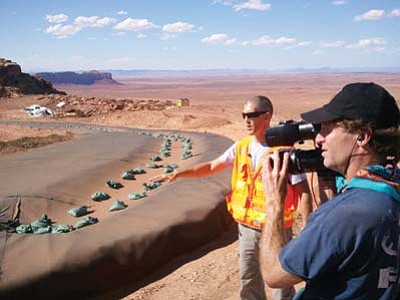 Jeff Spitz, the filmmaker and Elsie May Begay, the Navajo grandmother in the film cris-cross the nation showing the film and telling the story. Spitz continually updates the environmental justice story with 'webisodes', short videos filmed by Navajos and posted online. Working through the non-profit he co-founded, Groundswell Educational Films, Spitz raises awareness through the media, websites, and live events. The film and public engagement campaign are credited with triggering a federal investigation into uranium poisoning, pressuring changes in federal legislation, and after a decade of persistence, inspiring the EPA to clean up uranium contamination at Elsie Begay's home area.

Sparked by the success of this advocacy effort, tribal leaders invited Chicago-based Groundswell Educational Films and Navajo activist Mary Begay to present the keynote at the 2011 Tribal Lands and Environment Forum on Aug. 23 in Green Bay, Wis. This special presentation of The Return of Navajo Boy, an official selection of the Sundance Film Festival and PBS, will include a webisode about the clean up taking place at this time in Monument Valley. Groundswell enables Navajo activists to film the clean up with video cameras and travel around the reservation educating peers on health issues surrounding uranium.

Navajo activist Mary Begay will introduce the film, its recent epilogue and new webisodes which she filmed. Groundswell co-founder, Jennifer Amdur Spitz, will share Groundswell's methodology for media and social change. In addition, Groundswell is bringing attorney John Hueston, formerly the lead prosecutor in the Enron trials to discuss "Potentially Responsible Party" lawsuits involving major corporations and their environmental legacies. On behalf of the Navajo Nation Hueston successfully negotiated with GE and then pursued Kerr-McGee resulting in more than $20 million in new funds targeted for cleaning up Cold War-era uranium contamination in the Navajo Nation. Over 500 more abandoned uranium mines remain on the Navajo Reservation.

"While everyone is talking about Japan's radiation crisis, the Navajo Nation is struggling to secure a federal clean up of Cold War uranium contamination," said Spitz. "Navajos are dying of cancer at high rates, and we're working with new media tools to fight for environmental justice."

"Members of our tribal steering committee had seen this documentary at other venues and believed showing it at our forum would make a wonderful addition to breakout sessions and trainings," said Todd Barnell, Program Coordinator at the Institute for Tribal Environmental Professionals. "They believed that showing a local issue that highlights community-level involvement would be exciting and thought-provoking for our attendees." The Tribal Lands and Environment Forum brings together tribal and federal employees working in solid waste, brownfields, Superfund sites, underground storage tanks, and emergency response.

The Forum convenes at the Oneida Tribe's Radisson Hotel and Conference Center in Green Bay, from Aug. 23-25.

Since the film's premier at the 2000 Sundance Film Festival, Groundswell Films and Navajo participants have traveled coast to coast to raise awareness and help the tribe win support from Congress for the clean up of uranium contamination. Groundswell transfers media skills to Navajo community members and organizes film screenings at colleges and on Capitol Hill. Mary Begay is currently filming the clean up near her home in Monument Valley.

The 27,000 square miles of the Navajo Nation contain the largest uranium deposits in the U.S. and more than 500 abandoned uranium mines according to the U.S. EPA. Cold War era mines and several former uranium mill sites continue to contaminate land, water and homes and impact the health of residents.1950s-1970s: The U.S. government failed to warn Navajos about the dangers of uranium mining and radioactive waste despite the fact that the United States government was the sole purchaser of all the uranium.

In 2005 the Navajo Nation became the first indigenous government to ban uranium mining and exploration on its lands.In 2006 and 2007 Congress, led by Henry Waxman (D-California, Chair of the Budget and Government Oversight Committee) sought direct testimony from Navajo officials and demanded a plan of action from the five federal agencies responsible for what Waxman described as a "40 year history of bipartisan failure and a modern American tragedy."

In 2008 Congress authorized a comprehensive five-year plan to coordinate the clean up of contaminated structures, soil and water in the Navajo Nation. This summer marks the fourth year of the EPA's comprehensive clean up plan.

In April 2011 US EPA began its clean up operation in Monument Valley at the abandoned Skyline Mine which contaminated the homesite of the Navajo family featured in The Return of Navajo Boy. See www.navajoboy.com/webisodes.

Groundswell Educational Films is a Chicago-based nonprofit organization with a mission to collaborate across cultures in the art of documentary filmmaking, transfer media skills into disadvantaged communities and partner with stakeholders to engage audiences in social justice stories.