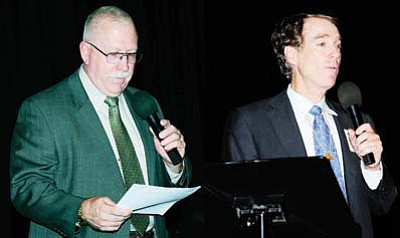 WINSLOW, Ariz. - A large number of persons attended a public meeting on Aug. 11 regarding a proposed private prison, which may be built in south Winslow just north of the existing Arizona State Prison. The private prison would be built and operated by LaSalle Corrections, which had representatives at the meeting. A representative of the company spoke regarding their plans for the facility.

Arizona State Department of Corrections Director Charles Ryan opened the meeting by saying that the purpose of the meeting was to get public input on how the community felt about the coming of a private prison. Ryan was the Warden at the state prison in Winslow for many years and is familiar with the city. He said that he would not express an opinion on where the prisons are to be built and by whom until it is time to make a decision.

Billy McConnell, an owner of LaSalle Corrections, spoke regarding the company and its plans. He said that the company is concerned with good security and has statistics, which prove that its prisons have that. He also emphasized the company's concern with rehabilitation of its prisoners. He said that the goal was to change attitudes and behavior so that when they are released prisoners will be able to find work and care for themselves and their families. A successful program will turn the inmates into good, productive citizens.

The speakers at the meeting who represent Winslow in some form of government included Navajo County Supervisors, Jesse Thompson and J.R. DeSpain, Treasurer Manny Hernandez, State Senator Sylvia Allen, Winslow Mayor Robin Boyd and Police Chief Steve Garnett. All of the state, county and state officials spoke in favor of Winslow being selected as a site for the prison. In addition, 19 local citizens spoke in favor of the city being selected.

All of the officials who spoke gave reasons why they thought Winslow being selected would be good for the city and the area. That could mean jobs for residents of Joseph City, Holbrook and Flagstaff and on the Navajo and Hopi reservations.

City Engineer Mark Woodson said that the statement an opponent of Winslow being selected that it would be costly to the city was wrong. He said that having the small, 1,000 bed unit built would not cost the city any significant amount to service it with water and other needs.

There were five speakers who voiced the opinion that being selected would not be good for Winslow. Three of that group were local and two were from Tucson. Marcia Garnett spoke in favor of the prison saying that there was a large crowd from the city present in favor of Winslow being selected who knew and understood the situation and did not need a couple coming from the big city to tell us how to think.

One Winslow citizen said regarding an argument from one of the opponents of the city being selected used in questioning the wisdom of becoming a prison city. He said. "I had rather have us be a prison town than a ghost town."

Reports indicate that some of the meetings at other cities being considered as sites for new private prisons have been plagued with unruly disagreements among the supporters and opponents of the sites. All of these proposals have been for prisons to be built by companies other than LaSalle, some of which have experienced escapes and violence. The meeting in Winslow was civil and although the majority of the audience was obviously in support of the prison coming to town those in opposition were allowed to present their argument s and treated with respect.

The decision on where to build the private prisons and what company is to build and operate them is planned to be made in September. Should LaSalle Corrections be selected the design will be completed in about that same month and work at the site begun in the first quarter of 2012. Interviewing and hiring for positions at the prison will begin in early 2013. Inmates are expected to start arriving in the second quarter of 2013.