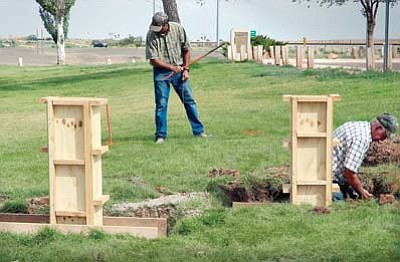 Todd Roth/NHO<br> The forms are in place ready for concrete, in preparation for moving of the Twin Towers Wreckage to its new home. Pictured from left are Gene Hancock and Dale Hancock, who are donating their labor to this project. They donated their labor and skills for the erection of the original 9-11 Monument in Winslow 10 years ago. A big thank you to Gene and Dale from the citizens or Winslow.

WINSLOW, Ariz, -As of Aug. 11, the ground was opened, a gravel base installed and forms were put in place for the new home of the Twin Towers Wreckage, obtained 10 years ago by the city of Winslow. The columns are reported to be two of the largest pieces in public view from the 9-11 Trade Center Attack outside of New York City.

The icons will be moved from their present location at the intersection of Transcon Lane and Third Street at the east end of Winslow. The new location is in the East End Park about one quarter mile west of the present location. The wreckage will be afforded a prime location with parking and high visibility to east and west bound traffic. The final monument will not be completed for at least a year but by Sept. 11, the memorial will be erected and the initial patio area around the columns will be completed. On this date beginning at around 5 p.m. the annual 9-11 Memorial Service will be held and there also will be a dedication of the new location for the columns. Participating will be a Color Guard, military representatives, speeches by dignitaries, flags, flowers, Scouts and Jr. ROTC from Hopi.

The finished Memorial Plaza will have lights, walls with all the 9-11 victims' names and other suitable memorial educational components.