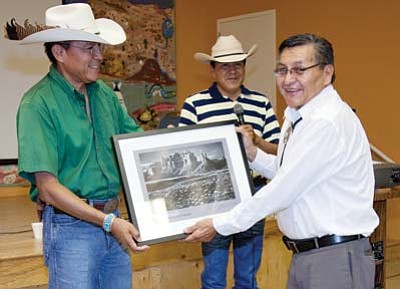 Diné Bikéyah is the land of the Navajo people. It lives within the hearts of all Navajo, as it has nurtured and sustained their way of life since the beginning of their existence.

The book is a compelling and thoughtful compilation of both voice and imagery. In it, several Utah Navajo including many of their Elders share their feelings and beliefs about the lands of San Juan County, Utah. It is particularly timely in regard to the debate on public land use in San Juan County, including which areas should be protected as federally designated wilderness, affects the Navajo and their culture.

For decades, the argument about the appropriate use of the land in San Juan County has continued without resolution. And for decades the voice of the Navajo in this debate has not been heard.

"I've lived in San Juan County all my life. I've heard the arguing from all sides of the public land use debate and it's still not resolved. As long as the arguing continues, the land continues to be desecrated. That is why we chose to put together this book," said Mark Maryboy, former San Juan County Commissioner and co-organizer of the event. "We asked our Elders for their wisdom in writing this book, because so many things hang in the balance for our people and this land. We hope our voices; through this book, can serve as a bridge to foster a more successful planning process".

Included in the book is an account of the Washington County land use process that resulted in the passage of public land use legislation for that county in 2009. The process, led by former United States Senator Bob Bennett, included local communities and several different stakeholders, coming together to end decades-old fighting over land use in the county. The book illustrates the need for a similar process to take place in San Juan County.

"The people and landscapes of southeastern Utah are emblematic of our western way of life. I am pleased the Navajo people answered the call to identify and prioritize their values and land uses on public lands within San Juan County. This isn't an easy task, but a very important one. Successful land use legislation is about people coming together, sharing their values and creating a vision that preserves the integrity of the landscape the diverse purposes it supports. I am honored to be a part of this book and hope it is used as a resource for successful land use policy," said former United Senator Bob Bennett. "I think it's critical that the Navajo in Utah are heard when it comes to land use policy, especially here in San Juan County. The Navajo have a special connection to the land and deserve to have a say in how it is used," said San Juan County Commissioner Phil Lyman.

"We care a great deal about these lands," said San Juan County Commissioner and Navajo Nation Councilman Kenneth Maryboy. "Now is the time to share our concerns and desires for this land and participate in a meaningful way for its future. As Navajo, we believe we have an obligation to see that the beauty and sacredness of the lands in San Juan County are restored, maintained and preserved for the generations to come."

"The Navajo have an inherent connection with Mother Earth. The land provides all that we need and we have a duty to protect and preserve it. It is our honor to do so," said Shelly.

The Diné Bikéyah book is a unique educational tool that can be used by anyone interested in knowing more about the Utah Navajo and their sacred relationship with the land in southeastern Utah.

To find out more about the Diné Bikéyah book, please go to www.utahdinebikeyah.org