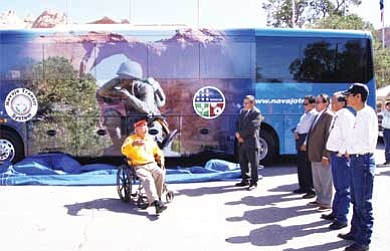 President Shelly commended the Navajo Transit System and their hard work for designing the new bus to honor the history of our Navajo warriors.

"Wherever this bus travels throughout the Nation, our Navajo children can see who our true heroes and warriors are and I thank the Navajo Transit System and the Division of General Services for making this tribute possible," he said.

"This is important to our young kids who should learn from our Navajo Code Talkers they must learn to speak Navajo. There is no excuse why any Navajo should not learn their own language," said Jim.

"It is such an honor to see a bus like this," said Little. "We fought hard for not only the United States, but for the Navajo Nation and for who we are as a tribe."

Funding from the American Recovery and Reinvestment Act made this a reality for the Navajo Transit System. The routes of the two new buses will run from Shiprock to Window Rock and Dilkon to Window Rock.

"The cost of each bus is $250,000 and takes about eight months to build and customize," said Division of General Services Executive Director Virgil Brown. "These two new buses just arrived and we are waiting on four more. A lot of credit goes to Mr. Lee Bigwater, the manager of the Navajo Transit System."

"We received assistance and guidance from both New Mexico and Arizona's Department of Transportation and the Federal Regional 9 office in San Francisco," concluded Bigwater. "Most of all, I am proud my son Christian took the photo selected as the final portrait for the bus."

President Shelly stated the Shelly-Jim Administration would continue to support the bus transit system's expansion plan to increase ridership. The transit system is a vital source of rural transportation for travel to work, shop, go to school or visit medical facilities.