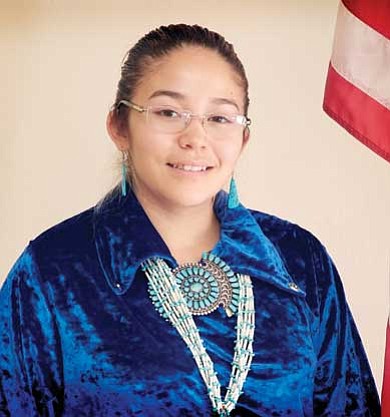 WINSLOW, Ariz. - It's fitting to be interviewing Qeturah Hubbell in the old Hubbell Trading Post in Winslow. Hubbell is 18-years-old, dressed in traditional Navajo shimmering blue material, with the skirt to her ankles. She has a full complement of silver and turquoise jewelry from head to belt.

Hubbell is a fifth generation Hubbell family member, working for the summer at the Winslow Falcon Cafe. She will be attending Northern Arizona University beginning this fall, majoring in art/sculpture. Hubbell's great-great-grandfather was the original Lorenzo Hubbell who began his trading business in 1878 and eventually created a business encompassing 30 trading posts. Lorenzo is said to be the only Caucasian buried on Navajo lands.

Qeturah Hubbell looks more like a Navajo girl than an Anglo. She is one half Navajo from her father's side of the family. Hubbell has three sisters and one brother, all older than her. Her siblings live in Phoenix and Texas, having left all small towns for the opportunities available in cities. Hubbell is very polite and soft spoken. When I was first introduced to her she looked at me with fear in her eyes. Yes, to the young I do look scary, but she got over it and consented to do an interview. For the interview, she came to the to the Winslow Hubbell Trading Post building, which is now the Chamber of Commerce, with her mom. We sat and talked in the quiet of the Conference Room and later, went into what was the old trading post sales room for a photo.

Hubbell got her name from a bank customer where her mom worked. An Islamic lady came in to the bank only once, named Qeturah. Hubbell's mom asked what the name meant and was told it means, "messenger to a higher power." Hubbell's mom thought the name just right, for the child not yet born. Qeturah Hubbell says the Hubbell name is recognized by people around her, but most strangers have no notion of the name Hubbell, and the significance. Hubbell has spent all of her previous school years at Saint Michaels near Gallup. It's a parochial Catholic school, which many of her cousins have attended.

Hubbell is an accomplished guitar player and singer and loves to paint as well. Her favorite food while in Flagstaff is ......... sushi. Go figure. Mexican food, Navajo food and mutton are high on her list, too. Her mom said she was called the "Mutton Baby" at one time because when she saw adults eating mutton and she having none, cried loudly.

Qeturah Hubbell is a lovely, graceful and talented young lady and is a dignified representative of the Hubbell name.