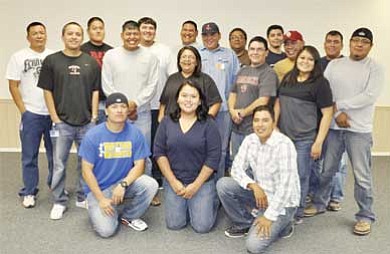 The seven week long Power Plant Fundamentals School, an updated version of the program NGS originated 40 years ago to train its operators, instructs each new employee in every phase of the power plant's technical operation, procedures and safety.

"It's a tough school and you all should be very proud that you made it," NGS Plant Manager Robert Talbot told the 14 men and three women - the second largest graduating class in the course's history.

The class began with 24 candidates. The graduates represent an unusually large group of the best of them. Following graduation, the class completed a week-long SMITH Driving safety course.

The highly technical course is nicknamed the "Do or Die School" because only successful completion allows the graduates to continue at NGS.

"They're just looking for a job when they start and by the time we're done with them, they're looking at a career," said instructor Jim Mineer, one of the course's two instructors.

"It's a lot of information in a very short period of time. They've got to take notes the entire time and then they have to study those notes. You can't just put anybody out there. They have to know what they're doing."

At the graduation, each student expressed a sense of pride - as much as relief - at his or her successful completion of the training.

"Two months ago, (instructor) Tom Hull came up to me and said. This will be the hardest thing you'll ever do, and he was right," said Sean Tee of Tuba City.

James Nez, an NGS instruments and controls technician who was invited to take the course and who became the 18th participant, said he expected his previous time on the job to give him an edge. But that wasn't the case.

"I thought it was going to be easy at first because I was already out there. But, no, it didn't work out that way," he said. "It was a challenge. It wasn't something easy."

The program has been equated to a 21-credit college course, with 10 hours a day of classroom lecture and fieldwork followed by at least two hours per night of study group.

cts taught is 50 pages long. A similar program with the same amount of material is offered by the San Juan Community College in Farmington, N.M., and requires two years to complete.

The curriculum includes sections on virtually every aspect of NGS's parts, equipment and operations; from electron theory to the railroad that delivers coal, from physics to the history of the Federal Reclamation Act of 1902 and why NGS was built where it was.

In simplest terms, because the power plant has been compared to an immense yet complicated teakettle, students learn the properties of steam, heat and fuel down to their molecular parts and how energy is captured and used.

Bob Henderson, NGS O&M manager of engineering, took the same course 35 years ago and compares it to military boot camp.

"People think that the plant is static and that there's not much going on there," he said. "But it's a continual process of change, maintenance and the replacement of equipment."

"We have now hired and kept almost 250 employees over the last 10 years," he said. "All of them are Navajo."

In the past, the course's failure rate was as high as 50 to 60 percent because of its difficulty and the volume of information students are required to remember, master and be tested on. There was a tendency for many students to falter in the eighth, ninth or 10th week of the original 11-week operator's course.

Plant managers Robert Talbot and his predecessor Charlie Brumback did not want to lower the course standards because they knew that all employees needed the same state-of-the-art knowledge and proficiency to work safely in a technical environment. Yet it was recognized that many of the students would be excellent in departments other than operations.

The result was an immediate rise in the graduation success rate.

The program begins before students ever see NGS. Usually twice a year, the NGS Human Resources Department advertises and schedules interviews throughout the Navajo Nation and in Phoenix.

Applicants take an aptitude test, a physical agility test and undergo a two-minute question-and-answer series with seven separate interviewers that has been likened to a "speed dating" session.

Those who score the highest among the interviewee's are offered a coveted place in the training program and go on the payroll while they learn. They are tested each week and must pass to remain in the program.

Along the way, students are taught how to study to learn the material effectively. But the key to their success is teamwork to help each other.

By the end of the course, students have progressed from learning how individual systems work to understanding how they function as an interconnected whole to produce electricity.

Today, much of NGS's exemplary safety record, low accident rate and operational efficiency is attributed to the training employees receive through the Power Plant Fundamentals School. The level of detail-oriented information, the student selection process, and the months of preparation by the instructors prior to each new course is considered the best in the program's long history.

"It's something we're very proud of," Tom Hull said. "We're constantly adapting to find better people to go through our school. This is the same thing we went through 35 years ago. We're still teaching the same core things so that each crew knows the same material. But I think we're doing a better job today."

Graduates assigned to the Operations Department include: David A. Baker, Sheena B. Howard, Joshua H. Redhair and Martin Sanders.