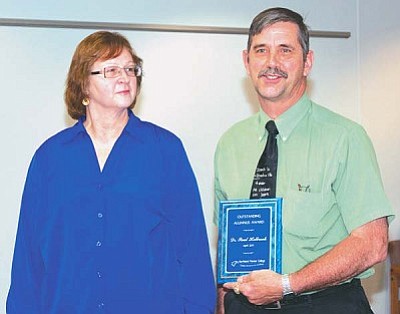 HOLBROOK, Ariz. - Dr. Paul M. Holbrook, well-known Flagstaff educator, was honored at the April 19 meeting of the Northland Pioneer College District Governing Board as the NPC Outstanding Alumnus for Spring 2011.

Holbrook didn't consider a career in education until after leaving a 20-year-career in business. "I decided I wanted to go back to school to teach. I knew I needed a master's degree to teach community college and I had to start somewhere. We were living in Holbrook at the time, so it made sense to enroll at NPC."

That was in 1991. By 1993, Holbrook had earned his Associate of General Studies (AGS) with an emphasis in business, and it turned out that his experience at NPC changed the direction of his life. "It was an ideal culture for what I thought it would be like to teach in the classroom. I discovered the fun part of community college was the diversity of students."

In rapid-fire succession, he went on to earn his bachelor's degree in Business (BSBA) with an emphasis in Finance and a Masters of Business Administration in Management (MBA) from Northern Arizona University.

In 1995, Holbrook began teaching business and computer information system (CIS) classes for NPC at the St. Johns and Springerville/Eagar Centers. He then taught at Winslow and at Keams Canyon (now the Hopi Center), and was recognized for his efforts and named department chair for the NPC CIS program.

Holbrook, son of a government contractor whose career required frequent family moves, jokingly says, "I was born in Bridgeport, Connecticut, but raised everywhere. I'd lived in 13 different states by the time I was in seventh grade." After marrying his ninth grade sweetheart (Debbie Holbrook, NPC librarian and his proud alumni award nominator) he wanted to stay put raising his own children. He managed to get his two daughters all the way through just one school district (Holbrook Unified), but did have to interrupt his son's schooling once in 1998 when he took a position at Coconino Community College (CCC). Since 1999, he has served as CCC's department chair for both Business and Education programs.

After an interval of about 4-5 years, Holbrook returned to school again - this time to earn his Doctorate of Management in Organizational Leadership from the University of Phoenix. Equipped with these credentials and a decade of experience, Holbrook began to expand his vision of making educational opportunity more accessible through technology.

As Holbrook likes to remind others, Coconino is the second largest geographical county in the nation, and residents in remote locations in the county often have little access to education. As a stunning example, he cites his work with the Havasupai tribe in Supai. Locations in the United States rarely get more remote than the bottom of the Grand Canyon. Holbrook has to drive an hour and a half just to reach the locale to board the helicopter that will take him into the Canyon. After several visits to consult with tribal representatives and train Head Start employees to earn required federal certification, he says the time is near where Supai students will be able to take classes right in the village through computer and interactive television technology.

Holbrook's other accomplishments include staging a breakout presentation on instructional technologies with his next presentation at the National Institute for Staff and Organization Development (NISOD). Also, as a member of a Flagstaff volunteer group, Alliance for Children's Early Success (ACES), he has helped develop Kinder Camp, a program with the aim of accelerating instructional success for children entering kindergarten. He also serves as a board member of the Arizona Natural History Association (ANHA) where he uses his business expertise to provide leadership and recommendations for operating the non-profit business.

How does this accomplished educator relax? "I have two passions," says Holbrook. "Bowling and hockey." He has bowled four 300-games in his life and even won the 1998 Arizona State All-Events Champion Tour.

Hockey is the passion he shares with his wife and son, a junior at Flagstaff High School. Holbrook watches as his son plays for the high school, and the family also attends and/or views as many professional and college games as possible.

Travel is also a pleasure that he and wife Debbie indulge. He hopes they will be able to enjoy more of this activity following his retirement in 2014. "We have traveled much of our lives, but there are many more places in the world to see and people to get to know."

From his years as an educator, Holbrook understands that learning does not always come easily. For those considering whether or not to attend college he offers this: "Gaining an education is a journey almost always filled with dead ends, disillusionment and difficulty. You never know until you fight through these obstacles how wonderful the opportunities are that education provides you. In achieving a graduate degree, you are furthering knowledge in order to help society. What better thing can you do?"